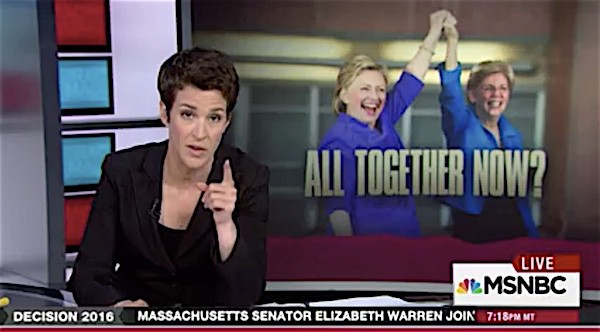 Many people pointed out yesterday that Elizabeth Warren’s appearance at Hillary Clinton’s rally in Cincinnati did not look like any ordinary rally, and Rachel Maddow took a long analysis of the event, and of the traditional process in trotting out a running mate.

Maddow noted the four ingredients typically seen by a candidate who’s putting themselves out there as the VP pick:

Number one, you have to show up, put yourself out there on behalf of the campaign, show that you are willing to do the work.

Number two, you have to clap right next to the microphone, you have to be a whole-hearted, enthusiastic, unreserved, not just an endorser, but an enthusiast for your party’s nominee. You need to sing their song.

Number three, you have to show a robust appetite for the jugular of the other party’s nominee.

…Finally, get in a very large room and blow the lid off.