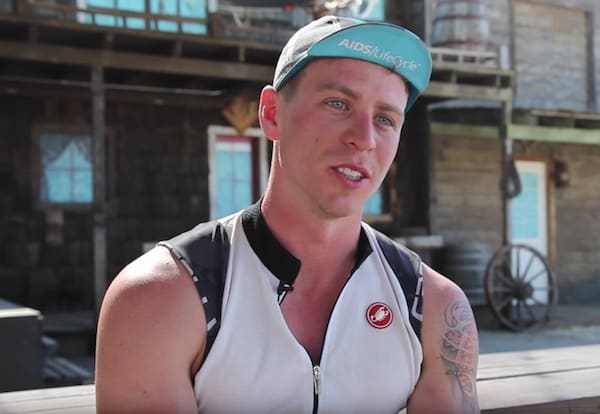 Luke is a recovering crystal meth addict who had been off the drug for 12 days after a relapse when he allowed vlogger Davey Wavey to follow him on the AIDS/Lifecycle ride and chronicle his journey. They had been planning the trip for some time, but hadn’t counted on the relapse.

Davey wrote about the trip in a message to Towleroad:

If riding a bike 545 miles from San Francisco to Los Angeles sounds challenging enough – imagine doing it 12 days after a crystal meth binge. And then imagine having the courage to share the story with the world.

This is the part where I introduce you to Luke. He’s a handsome 20-something personal trainer from Texas whose big smile and blue eyes hide a lot of pain and struggle. Luke is a recovering addict. And after more than two years of sobriety – and just days before the AIDS/LifeCycle bicycle ride and fundraiser – he relapsed.

Luke told me about his relapse over text.

For a month, I had been planning to interview him on the ride. It was a story of victory. It was the story of someone who triumphed and turned their life around. Suddenly, this was a very different narrative.

Luke didn’t want to back out of the ride – or the interview. He wanted to press on. He wanted to get up and push forward and do what no one thought he could do.

And so I filmed his journey. For seven days, we biked. And each afternoon, we sat down with the camera and talked. It’s still a story of victory, in a way, but also a story of the human experience. Life isn’t simple. We don’t just pick ourselves up and move on. We fall down. We struggle. We get up and fall again. It’s messy. It’s difficult. It’s what it means to be human. And that’s Luke. That’s all of us.