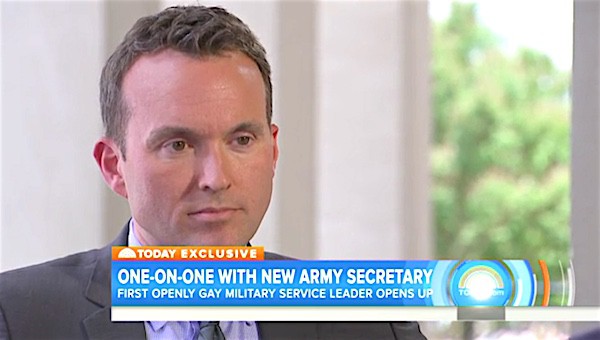 Eric Fanning, the first openly gay Secretary of the Army, sat down with Today’s Matt Lauer to talk about the issues his sexual orientation has raised in his military career.

“I’ve gotten used to the fact that this is going to be a part of any time I get a new job or do something…And when it first happened I was more bothered by it because I didn’t quite have the track record that people know now. And I wanted the focus on qualifications. Now I embrace it.It’s so important to so many people, I realize. And something I didn’t have 25 years ago.”

“I was first in this building in the Clinton administration as a 24-year-old junior aide and I ended up leaving, because I didn’t see that there was a future for me as an openly gay man. And so to be able to come back in this job is beyond what I had ever imagined.”

Previous Post: « A Lonely Gay Man Sat Down at a Restaurant: WATCH
Next Post: Americans Are Having More Gay Sex: Study »