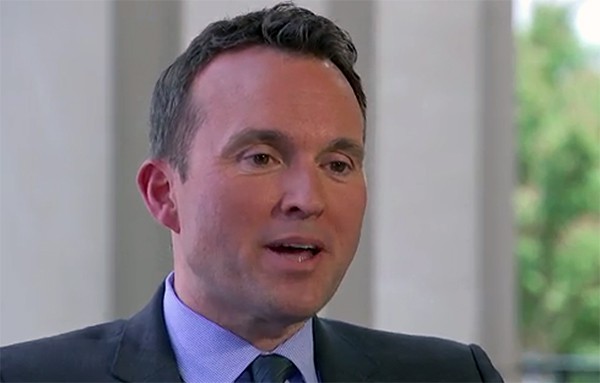 It’s been less than three weeks since Eric Fanning made history by becoming the first openly gay leader of any U.S. military branch. On Wednesday he hinted at more progress to come.

Last night he was honored at the Capital Pride Heroes Gala at the Carnegie Library in Washington, D.C. where he received the Paving the Way award, along with eight other individuals. The award “honors those in public life who have shown courage and leadership in helping to advance the cause of LGBT rights,” and it’s given annually by the Capital Pride Alliance.

In his five-minute acceptance speech, Secretary Fanning “hinted at a possible lifting of the ban on out transgender military service,” as reported by Metroweekly:

“Time and time again in the military, as we have opened it up to people who weren’t allowed to serve in the past: African-Americans after World War II; women over many years, not just recently; the end of ‘Don’t Ask, Don’t Tell’; [and] things haven’t fallen apart, they’ve gotten better,” Fanning said.

“The problems we’re facing, the challenges we’re facing, are ever more complicated in the world, certainly in the national security sphere,” he continued. “Why wouldn’t we want as many people as possible solving those kind of problems? The more backgrounds we have, the more viewpoints we have, the more experiences we have…the better off we’re going to be. And we’re going to keep getting better, fighting for more people to be included and have rights. … That’s all that this is about, to have the same opportunity to defend the nation we all love.”

Earlier today, Fanning told NBC’s Matt Lauer he didn’t even imagine he would have a future in the military as an openly gay man.

A little over five years ago, ‘Don’t Ask Don’t Tell’ prohibited gay and lesbian people from serving openly in the military.

Previous Post: « The Maytag Man Wants to Celebrate Pride with You
Next Post: Colton Haynes Is On A Tight Leash – LOOK »