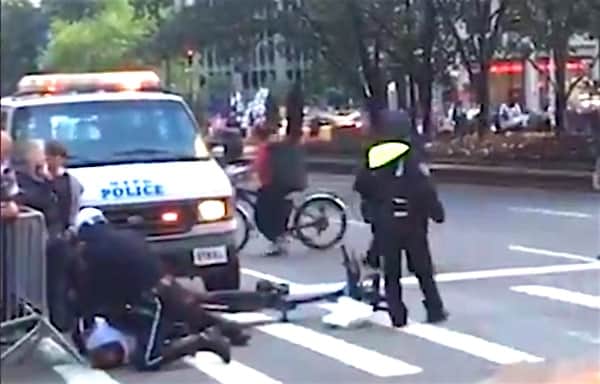 The gay cyclist who was tackled in front of President Obama’s motorcade after mistakenly entering a barricaded zone in New York whilst on his way to a hook-up is getting a bit of good news thanks to gay dating site Manhunt.

The site is offering him a free a year of their upgraded service ‘Manhunt plus’ as well as 52 free roundtrip Ubers. “That’s safe, motorized transportation for one hook-up per week!” Manhunt told Towleroad.

As we reported earlier, the man, 59-year-old Daniel Provencio, was blasting Carly Rae Jepsen’s “Call Me Maybe” while riding his bike on 50th Street when he failed to notice the police cordon for President Obama’s motorcade. He was tackled to the ground by NYPD only moments before the motorcade passed through.

Provencio said he ended up missing his hook-up on account of being detained by police. He called his beau after being released but to no avail. “Manhattan men are huge on punctuality,” he said. In response, Manhunt said, “[We want Provencio] to know that his Ubers are good within NYC’s five boroughs so he’ll be able to extend his hunt outside of Manhattan where punctuality may not be as large of a concern.”

ICYMI, watch video of the man being taken to the ground by police only moments before President Obama’s motorcade passed by, below.