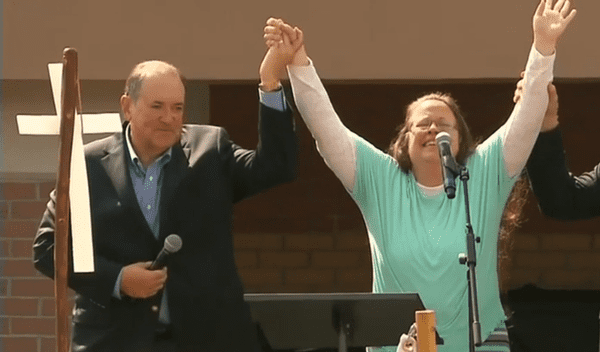 Mike Huckabee paid $25,000 in a settlement with the band Survivor for his illicit use of the song “Eye of the Tiger” at a rally he held to celebrate the release of anti-gay county clerk Kim Davis.

You’ll recall that bizarre event transpired just outside of the courthouse where Davis was jailed for failing to abide by the Supreme Court’s gay marriage ruling in Obergefell v. Hodges.

[Huckabee] recently agreed to a confidential settlement with Rude Music. That company is owned by the Survivor guitarist who cowrote the song, Frankie Sullivan.

They settled out of court, and it came to light when Huckabee listed the $25,000 cost as a campaign expense on federal election records. A payment to Rude Music is listed as a “legal settlement” for “copyright infringement.”

Huckabee paid half of it in May and listed the $12,500 payment as an “itemized disbursement.” He listed the other half as “debts and obligations.” Both appear on a June 20 filing.

Huckabee tried to get around the lawsuit brought against him by claiming the rally for Davis was a “religious assembly… signifying joy and praise at the release of Mrs. Davis.” The only problem was that Huckabee claimed the rally as a presidential campaign expense.

PREVIOUSLY – Survivor Frontman: We Did Not Grant Kim Davis Rights to ‘Eye of the Tiger’

Huckabee has asked that he be allowed to set up a legal defense fund but the FEC says Huckabee has to pay the fine himself.

Watch a report from CNN with Survivor founding member Jim Peterik, below.