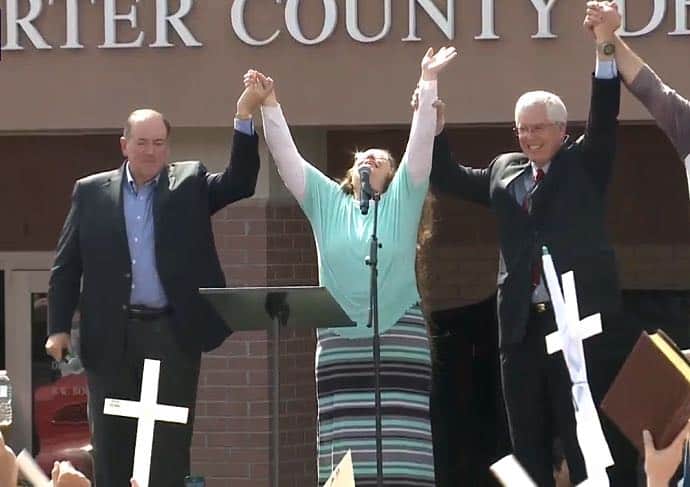 Mike Huckabee is being sued for playing Survivor’s “Eye of the Tiger” at a rally supporting Rowan County, Kentucky clerk Kim Davis when she was released from jail in September.

The suit, filed in federal court in Illinois on Wednesday by Rude Music — operated by founding Survivor member and “Eye of the Tiger” co-author Frank M. Sullivan III — claims that Huckabee violated the copyright of the song by allowing it to play when he escorted Davis, who famously refused to issue marriage licenses for same-sex couples, from the Carter County Detention Center.

Rude Music claims that Huckabee should have known better because, as a “media-savvy business owner” as well as the author of more than a dozen copyrighted works, the politician “is sophisticated and knowledgeable concerning the copyright laws.”

The suit goes on to say that Huckabee’s 2008 campaign used the Boston song “More Than a Feeling” and was told to stop.

Sullivan intimated that a lawsuit might be on its way shortly after the rally occurred when he wrote on Facebook:

C’mom Mike, you are not The Donald but you can do better than that –

Huckabee later tried to distance himself from use of the song when he was cornered by TMZ, saying, “I didn’t pick it I had nothing to do with it.”