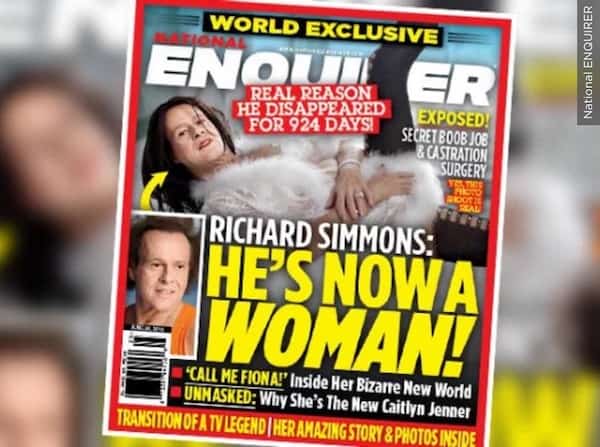 Fitness guru Richard Simmons has been in hiding for more than two years because of a gender transition and is now a woman, according to the National Enquirer:

In an explosive world exclusive, The ENQUIRER can now reveal jaw-dropping never-before-seen photos of Simmons draped in furs and lingerie, living as a woman behind the walls of his Hollywood Hills mansion!

Insisted a friend, “[This is] not just Richard Simmons in drag. This is Richard dressed as a softly spoken woman named Fiona!”

Two years of secret surgeries have brought him to this point, said the source. From breast implants to hormones and more, he’s sparing no expense to make the transformation complete!

Radar exclusively reported in March that Simmons had begun dressing as a female on occasion.

“Richard would go into great detail about the outfits he would wear,” an insider said at the time. “It’s a fun thing for him to do.”

Simmons wrote on social media on Monday that a recent trip to the hospital was due to dehydration.

Thank you to everyone who has reached out with love and concern after hearing I was in the hospital. I was… https://t.co/RsIznuxjZO

Thank you to everyone who has reached out with love and concern after hearing I was in the hospital. I was dehydrated and needed some fluids and now I am feeling great! Summer is here – drink plenty of liquids. Big hugs and kisses for caring. <3