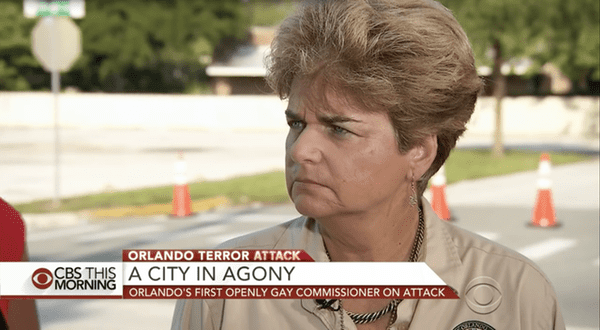 Patty Sheehan, the openly lesbian city commissioner of Orlando, Florida, is blasting the Republican party for fomenting anti-LGBT hatred, hatred which fueled the mass shooting at the gay nightclub, Pulse, on June 12.

Sheehan spoke with Michelangelo Signorile about the massacre saying she was upset that many Republicans had failed to mention that the attack specifically targeted the LGBT community. She also went after Florida Republicans for their failure of leadership in the wake of the shooting.

Via Signorile’s column at HuffPo:

“Marco Rubio, the senator from Florida, walked on our blood-stained streets with people from the Hispanic community,” Sheehan observed of Rubio, who has been a vocal opponent of LGBT rights and even promised if elected president to try to overturn the Supreme Court’s historic marriage equality ruling. “And he went right back to Washington – one of the few times he actually showed up for work – and voted against sensible gun legislation.”

‘If this doesn’t change your heart?” she continued, not needing to finish the rhetorical question. “There were people from [Rubio’s] office – it was [a staffer’s] hair stylist who got shot and killed. This was a personal connection people from his office had with these young people. And he still couldn’t find it in his heart to do the right thing.”

Sheehan added of Florida’s anti-gay Governor Rick Scott, “My governor couldn’t say the word ‘gay’ — until he was called out on it.” Of all Republicans, Sheehan told Signorile, “…I’ve called a lot of them out on it. I said, ‘How dare you come here to my city – our city – and stand in front of the microphone and take up space….You loaded those bullets with hatred, as far as I’m concerned.'”

Listen to the interview, below.

You can also watch an interview with Sheehan the day after the attack, below.