A study published by the National Toxicology Program last month, which showed an increase in tumors in male rats exposed to cellphone-like radiation, raised some concerns about the safety of too much cell phone usage. While researchers agree that the findings are far from conclusive, it made us question how we have changed since mobile phones became part of our lives.

Thankfully, Canadian couple Mitchell Moffit and Gregory Brown, the brains behind YouTube sensation AsapSCIENCE, just posted a new episode where they ask “How is your phone changing you?” 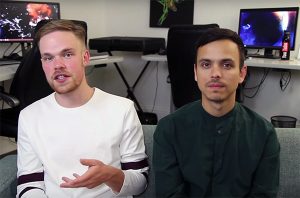 People spend an average of 4.7 hours a day looking at their phones, the episode’s narrator Mitch says, and just the posture alone can be bad for the spine. Combined with the length of time spent in from of the computer, that has led to an increase in the incidence of myopia (near-sightedness) in North America. In the 1970s, about one quarter of the population had the condition. Today, nearly a half do.

When it comes to the psychological effects, Mitch explains how we become addicted to our phones by using the very popular Candy Crush game as an example: when you achieve small goals, he says, your brain is rewarded with bursts of dopamine. A process called “compulsion loop” makes you want more and more of it. That loop, by the way, happens to be the same loop responsible for the behaviors caused by nicotine and cocaine.

Mitch also explains how cellphone waves can mess with sleep patterns and even affect how the brain functions, which is why Harvard Medical school advises that the last 2-3 hours before bed be technology-free. (And, yes, that goes for Scruff and Tinder, as well.) He concludes the video saying that “while phones have been part of a positive change in the world, there’s no denying that they are changing us.”

The adorable couple has two YouTube channels, AsapTHOUGHT and AsapSCIENCE with almost 6 millions subscribers. They met in college while studying biology, and have been together since 2007. They publicly came out on YouTube in 2014, which you can see in the video below:

Previous Post: « These 50 Gay Men on PrEP Donated Blood to Protest the FDA’s Gay Blood Ban – WATCH
Next Post: Zachary Quinto Gets His Freak On – WATCH »