As we’ve previously reported, the FDA currently bans all men who have sex with men (MSM) from donating blood if they have been sexually active at some point within the last year. And even though that policy flies in the face of evidence provided by doctors and scientists showing that gay men pose no heightened risk of contaminating blood supplies, the FDA’s policy remains in place. In fact, it used to be much worse. Previously, gay men were banned entirely from ever donating blood. 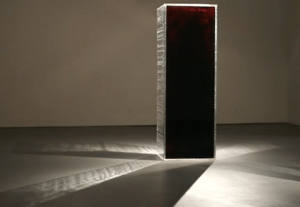 Last year, New York-based artist Jordan Eagles created a striking sculpture, ‘Blood Mirror’, made from the blood of nine gay men and intended to draw attention to the discriminatory ban. Now, 50 more gay men, all of whom are on PrEP, have donated a tube of their blood to the sculpture in protest of the FDA’s policy.

Said activist and filmmaker Leo Herrera (whom readers may remember from a piece he published here), said in a statement, “The belief that gay men are inherently prone to disease is the equivalent to racial phrenology, striking at the fragile ability to view ourselves as healthy and ‘clean.’”

More on the sculpture from the film’s YouTube posting:

The sculpture, Blood Mirror, is a seven-foot-tall monolith in which the viewer can see themselves reflected in the blood of the donors, which has been encased and fully preserved. The sculpture hopes to inspire dialogue about the FDA’s discriminatory policy. A totem of science and equality, the sculpture is a time capsule of the donors’ blood that embodies the 33-year history of the FDA’s discriminatory policies and the role of PrEP as a recent advance in the prevention of HIV transmission. PrEP (pre-exposure prophylaxis), a medication that is proven to be 99% effective to prevent HIV when taken daily (iPrEx trial).

Watch a video on the men who have donated to ‘Blood Mirror’, below. Warning: the video is unfriendly for those who are squeamish about needles and/or blood.

Previous Post: « Davey Wavey and 13 Queer YouTubers Share Why They Love Being Gay – WATCH
Next Post: How is Your Phone Changing You? This Couple Has a Few Ideas »