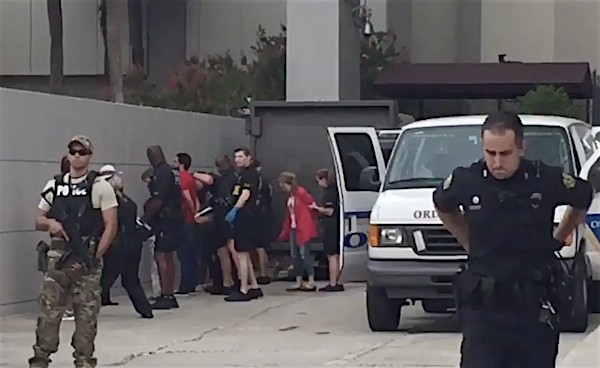 LGBT activists who were staging a 49-hour sit-in outside Senator Marco Rubio’s office in Orlando, Florida, one hour for each of the victims of the Orlando massacre, were arrested last night after just a few hours of the planned protest.

The protesters were demanding that Rubio back gun control legislation, a national LGBT non-discrimination law, and immigration reform. Activists were using the hashtag #SitInForThe49 to draw attention to their cause.

Orlando police was called to the scene at 7pm, when the group consisting of dozens of activists were asked to leave the building. Orlando Mayor Buddy Dyer called Organize Now! Executive Director Stephanie Porta to plan a peaceful conclusion to the demonstration.

The majority of the sit-in participants spilled out into the main square in front of the downtown building and chanting “No Justice! No Peace!” and waiving signs to raise awareness for the cause. The ten people that stayed behind kneeled in front of the doors while Orlando Police zip-tied their hands and walked them out through the back entrance. The entire process between the two parties appeared to be peaceful and respectful.

The arrests were the end of long day for the activists in the lobby of the building where they recited the name of the victims and called out for action by lawmakers.

The Orlando Police said they made 10 arrests for trespass after warning, a misdemeanor.

Here are some video of the arrest and afterward:

Activists who agreed to leave are outside singing… #SitInForThe49 @WESH pic.twitter.com/4ga42AR42o

These activists are staying. @WESH pic.twitter.com/EbvbW1RQrj