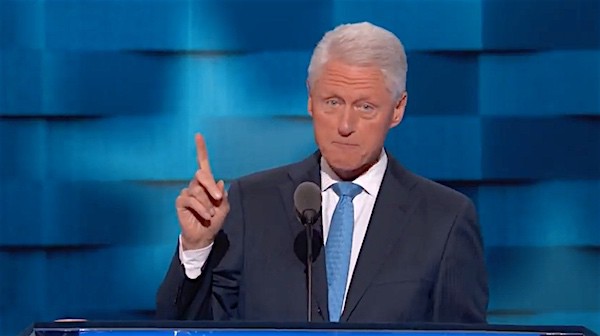 Starting with the first moment he saw her in 1971 following a college class on political and civil rights, Bill Clinton married his personal relationship with Hillary Clinton to her determination to figure out “how to make things better” in a speech that held the Democratic Convention in Philadelphia enthralled.

“I asked her to take a walk…we’ve been walking, talking and laughing together ever since,” said Clinton, who stayed focused on Hillary’s experience as a civil rights activist and mother to Chelsea, to her resolve to be elected to public office in New York.

He took aim at Donald Trump without mentioning him:

“She never made fun of people with disabilities, she tried to empower them based on their abilities.”

And he lauded her experience as Secretary of State:

Clinton also labeled her a “change maker” —  a descriptor likely to remain for the remainder of the campaign:

“She’s insatiably curious, she’s a natural leader, she’s a good organizer, and she’s the best darn change-maker I ever met in my entire life.”