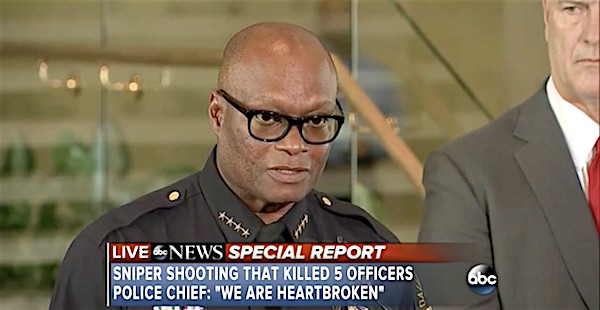 Dallas Police Chief David Brown gave an update on the shooting that took the lives of 5 police officers last night during a protest in downtown Dallas. Three suspects are in custody and one is dead.

Brown said that officers cornered one suspect and tried to negotiate, had exchange of gunfire, and used a bomb robot to detonate device where the suspect was.

“Other options would have exposed officers to grave danger. The suspect is deceased as a result of detonating the  bomb.”

A hostage negotiator got suspect to talk before he died, and this is what the suspect said:

Brown also praised the heroic efforts of police officers who moved toward the gunfire as it unfolded and pleaded with the public for support:

“We don’t feel support most days. Let’s not make today most days. Please, we need your support to be able to protect you from men like these who carried out this tragic, tragic event.”