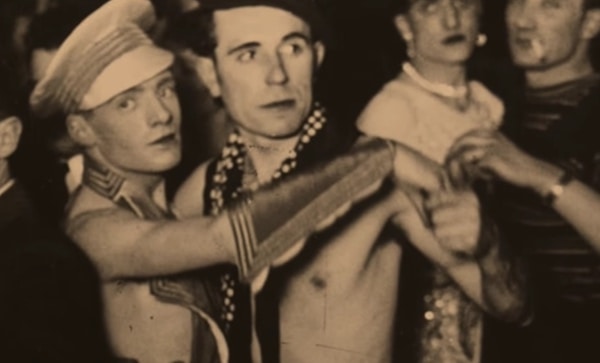 The vintage opening visuals of the iconic 80’s TV series Cheers are as iconic as its theme music. Singer-songwriter K Anderson took them as inspiration for this lovely reinterpretation that resonates powerfully after the Orlando massacre.

We do need the places where everybody knows our name, more today than ever.

When I was recording this song it struck me that the lyrics, and especially the line ‘you want to go where people know, people are all the same’ could be describing the safety and solace found by outsiders in a gay bar. So, I went digging for vintage photos of gay bars, clubs and parties in order to recreate the iconic opening credits from the tv show…. And, it was hard! There are not that many old photos out there of people in gay bars (unless they are rioting out the front!), and especially few from the UK.

So, what you find in this video is what I hope is a neat collection of photos through time, from Berlin and Paris in the 1930s, to the Mattachine Society, to Stonewall, to the disco craze of the 70s.