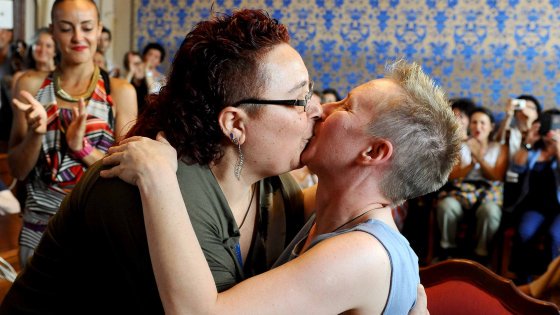 Same-sex couples in Italy have begun entering into civil unions, months after the nation became the last in Western Europe to provide some measure of marriage rights for its LGBT citizenry.

Same-sex civil unions were finally made legal by Italy’s parliament after a long debate that came down to a confidence vote on Prime Minister Matteo Renzi.

Town halls across Italy Friday reported that requests for gay unions have started coming in, although there was confusion over who was the first to have their partnership registered as the legislation took effect.

Some local media reported that a lesbian couple known as Helen and Deborah held a ceremony attended by family and friends last Sunday in Castel San Pietro, in the province of Bologna.

Meanwhile, other media reports indicated that a couple in Milan was the first same-sex couple to enter into a civil union. Via The Local:

In Milan an official went Wednesday to an intensive care unit to perform the civil union ceremony of a terminally ill 53-year-old teacher named Margherita and her partner of 28 years.

Theirs will be the first registered in Milan in about 10 days’ time, the city told the media.

Regardless of who was first, it seems that same-sex couples in Italy are finally being granted some legal recognition of their relationships.

However, same-sex couples are still not allowed to adopt and, as DW notes, “more complicated cases, such as couples of different nationalities who got married overseas”, will have to wait until December to be formally recognized.

In other good news for same-sex couples in Italy, the balcony in Verona where Romeo (of Shakespeare’s Romeo & Juliet) is rumored to have wooed Juliet has been made available to same-sex couples to celebrate their unions. Tornos News reports:

Verona’s city council announced this week that all municipal venues traditionally available to heterosexual couples getting married could also be used by same-sex couples entering civil unions. These include the Casa di Giulietta, a renovated medieval residence that once belonged to a noble family, the del Cappellos, who are believed by locals to have inspired Shakespeare’s fictional Capulets.

The council said that Verona, like every other municipality, was awaiting instructions from authorities on how the new unions needed to be recorded, but that the city was already making preparations to host the celebrations. About 20 requests have so far been received.