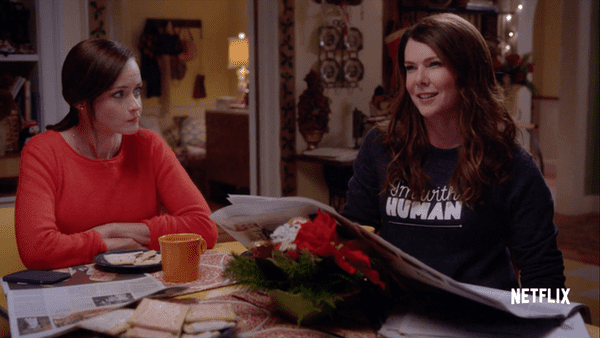 It’s finally here. Your first glimpse at the long-awaited return to Stars Hollow.

On Wednesday, Netflix released a new trailer for its upcoming Gilmore Girls mini-series, Gilmore Girls: A Year in the Life. The trailer opens with images familiar to Gilmore fans (Luke’s, The Dragonfly Inn, Lorelei’s house), and then puts the attention squarely where it belongs: on the banter between Lorelei (Lauren Graham) and Rory (Alexis Bledel).

Mocked by MadTV as “Gabmore Girls”, Gilmore Girls became famous among fans and haters alike for its mile-a-minute dialogue, often focused on pop culture. And it looks like the mini-series will return to this same territory. In the new trailer we see Lorelei and Rory discuss two figures currently popular on the pop culture landscape: Amy Schumer and John Oliver.

Netflix also announced on Wednesday that the 4 part TV event will premiere on November 25.