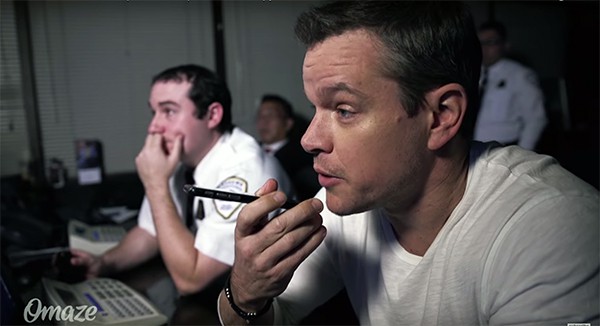 Fourteen years after the first adaptation of the popular action spy thriller series based on Jason Bourne, a character from Robert Ludlum’s novels, Matt Damon is back in the fifth installment of the film series, this time simply called Jason Bourne.

Bourne is a former CIA super spy who suffers from psychogenic amnesia and does everything he can to find out who he is, while running away from CIA agents who want to kill him.

To promote the release of the new film, Matt Damon partnered up with Omaze, an online charity auction organizer to raise money for water.org, a nonprofit aid organization cofounded by the actor whose goal is to bring safe drinking water and sanitation to certain areas of developing countries.

In a Los Angeles park, a stranger hands unsuspecting people a cell phone from which they start getting spy-like instructions from Damon such as tying their shoelaces, collecting an envelope from a guy on a bridge or buying a $14 hotdog. It’s the classic Jason Bourne scenario, only the people being filmed have no idea Mr. Bourne himself is on the other end of the line.

The result is a funny set of pranks, and for those who follow the instructions, a most unexpected ending.

Even though Jason Bourne is the fifth installment of the series, this will be fourth time Matt Damon stars in the movie. In 2007, after finishing his third film, The Bourne Ultimatum, Damon told Variety he wouldn’t do a fourth one: “We have ridden that horse as far as we can,” he said.

Here’s a look at the Bourne Evolution: