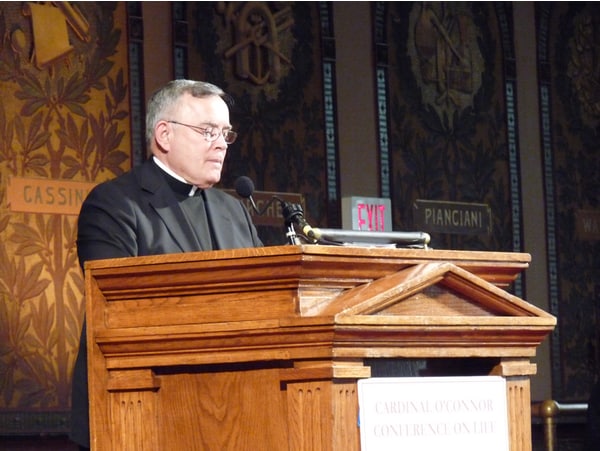 Charles J. Chaput, the Archbishop of Philadelphia, has banned sexually active gay people, as well as co-habitating unmarried couples and divorced couples from receiving communion in his archdiocese.

Chaput issued the guidelines in reference to a document written by Pope Francis called Amoris Laetitia, “the joy of love.”

His six-page instruction, which appears on the archdiocesan website, may be the first of its kind issued by the bishop of any American diocese in response to Amoris Laetitia, Latin for “the joy of love.”

Acknowledging that it is a “hard teaching,” Chaput goes on to say that Catholics in same-sex partnerships, those remarried without a church annulment, and cohabitating persons may not serve on parish councils, instruct the faithful, serve as lectors, or dispense Communion.

Allowing persons in such “irregular” relationships, “no matter how sincere,” to hold positions of responsibility would “offer a serious counter-witness to Catholic belief, which can only produce moral confusion in the community,” according to Chaput.

In its examination of homosexuality, the Philadelphia guidelines state that two people in an “active, public same-sex relationship, no matter how sincere, offer a serious counter-witness to Catholic belief, which can only produce moral confusion in the community.

“Those with predominant same-sex attractions are therefore called to struggle to live chastely for the kingdom of God. In this endeavor they have need of support, friendship and understanding if they fail,” the rules state.

But the greatest attention in the guidelines is focused on couples who are divorced and civilly remarried who have not obtained an annulment of their first marriage.

Chaput’s guidelines come in spite of a passage from Amoris Laetitia in which the Pontiff writes, “it can no longer simply be said that all those in any ‘irregular’ situation are living in a state of mortal sin and are deprived of sanctifying grace.”

Chaput has been a vocal opponent of gay marriage and has urged his flock to attend a rally organized by the virulently anti-LGBT group, the National Organization for Marriage (NOM). Chaput was a co-sponsor of that rally for “traditional marriage.”

Chaput’s guidelines were issues mere days after Pope Francis agreed that the Catholic Church should apologize to gay people and seek forgiveness for fanning the flames of homophobia.