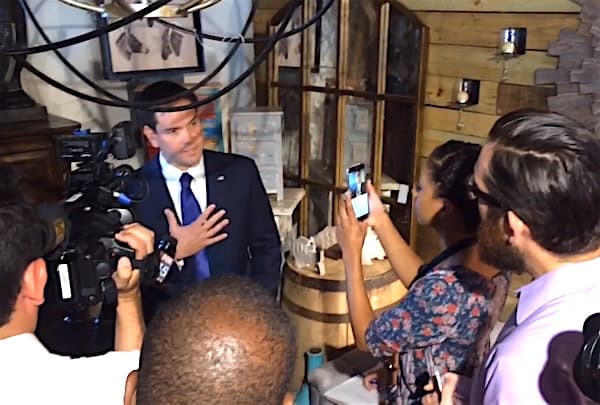 A gay man confronted Marco Rubio at an event near the Pulse LGBT nightclub in Orlando as the Florida Senator attended an event to assist business traffic in the area following the mass shooting, the Orlando Sentinel reports:

“I’m really angry at you,” Moran said. “I don’t feel you’re doing anything to support the LGBTQ people. I need to know what is your relationship is with the NRA. Why are you talking with transphobes and homophobes like John Stemberger… all of you have blood on your hands,” Moran said.

Rubio responded, “I disagree with your assessment… Homophobia means you’re scared of people, I’m not scared of people. Quite frankly I respect all people. We probably have a disagreement on the definition of marriage.”

Moran interrupted again, “Your policies kill people. Your policies enable people to be murdered. You have to protect us. You’re not protecting us. We’re going to be gunned down.”

The paper also reported that Rubio was often drowned out by a crowd of several dozen protesters who had gathered outside the event to demonstrate against Rubio’s inaction on gun control.

Previous Post: « There Was a ‘Gays for Trump’ Party at the RNC and It Was Absolutely Insane – VIDEOS, PHOTOS
Next Post: Ben Carson’s Latest: Transgender ‘Doesn’t Make Any Sense’ and Hillary Clinton Has Links to Lucifer »