Remember when Sony rebooted Sam Raimi’s take on Spider-Man (2002) with The Amazing Spider-Man (2012)? Their whole conceit at the time appeared to be “What if you didn’t know the story?” so they just told it again. Only everyone actually did know the story. The result was an instantly forgettable retread, useless but for the printing of money. While that may have been the whole point, it left a lousy corporate aftertaste. It took the world gargling with some Marvel Studios mouthwash (aka Captain America: Civil War) to make people excited about Spidey again.

The good news is that the mega corporation appears to have learned from their mistakes. Ghostbusters NOW does not moronically assume you don’t know Ghostbusters THEN. Sure, it’s the same story again — the Ghostbusters set up shop, refine supernatural gadgets, fight against a supernatural invasion of New York and the bureaucrats that get in their way — but writer/director Paul Feig and his cowriter Katie Dippold have correctly guessed that the fun of the movie will be in the makeover.

The story gets a new look, freshened up details, and most famously, four female Ghostbusters and a male receptionist in place of the original’s four men and a female receptionist; that gender inversion proved more revolutionary that any rational human might have expected because a lot of manbabies have been freaking out on the internet ever since. 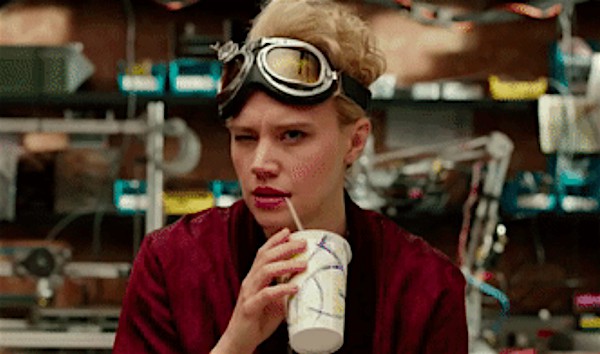 It is here where I should probably note that I think the original is fine, but nothing more. Its reputation as a great comedy is the work of supernatural mass possession, and/or nostalgia. Nevertheless people hold it sacred. Those people include everyone involved with the new film.

Given that Ghostbusters (2016) takes every opportunity it can to wink in the direction of Ghostbusters (1984) as if you know it by heart, it’s a mystery as to why they didn’t just write a new story that takes place 32 years after the original rather than revising the original to take place now. But that’s Hollywood logic: they’re obsessed with origin stories even in franchises that are on film number 3, the case here, or 7 (as with The Force Awakens and its veritable retread of Star Wars‘s plot).

That aggravation aside, it was hard to even stay a little bit mad at the film since it starts well with a tour of a haunted house (with actual jokes for minor characters!) and stays funny for good stretches thereafter. It also knows how to keep a single gag going through multiple scenes as with its clever obsession with the iconic Ghostbusters logo. The cast works hard to entertain.

The original film leaned so hard on Bill Murray’s effortless deadpan for its laugh-out-loud moments that it sometimes felt like a one man show that the goddess Sigourney Weaver was occasionally interrupting to steal scenes. The new version spreads the joking around much more equitably and why not? Melissa McCarthy, Kristen Wiig, and Leslie Jones are all dependably funny women and the screenplay makes sure they each get a big solo moment. But it’s Kate McKinnon as the lusty for science! (and…?) “Holtzmann ” who generates the biggest laughs.

Chris Hemsworth has a blast mocking his ridiculous attractiveness as their dumb hunk receptionist and the film rewards him with a showstopping finale. The ladies keep him around just for the pretty which is a fun but not mean-spirited potshot at Hollywood’s perpetual Male Gaze.

In one of the movie’s most memorable gestures, Holtzmann licks one of her weapons; her own genius turns her on. But, keeping it real now, no one will love this movie as much as this badass loves science. I don’t want to oversell it. Let us not speak of the hideous new version of the 1984 theme song. Let’s not dwell on the unfortunate fact that the only black Ghostbuster is the sole non-scientist again. And we won’t check the running time since Paul Feig makes super funny movies (Bridesmaids, The Heat, Spy) but they always risk outstaying their welcome.

But “Answer the Call,” anyway as the tagline commands. The best reason to see Ghostbusters (2016), aside from crushing the spirits of misogynists who want it to fail, is that it’s sweet and silly where the original opted for sarcastic and smug. They may have nurtured the script with that 1984 template, but by its very 2016 nature it becomes a different beast. And the feminist revamp, if we can even call it that, is of the affectingly subtle variety. These four women respect each other and work together to get better at Busting those Ghosts. It may not be the freshest popcorn entertainment in the world, but in this particular movie summer, it’ll more than do.