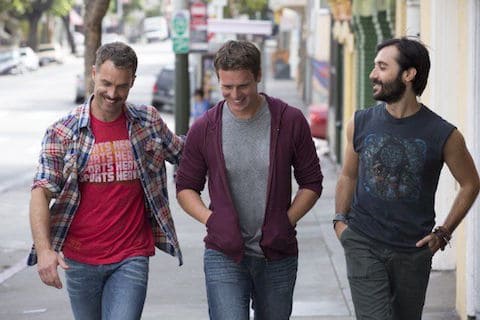 There’s a lot you could say about HBO’s Looking. Since its debut in 2014, the divisive drama has been a lightning rod of conversation, whether it’s been heaping praise onto director Andrew Haigh’s signature naturalistic style, discussing the need for diverse representation or just wondering whether Patrick (Jonathan Groff) would end up choosing sweet, sensitive Richie (Raúl Castillo) or the British beefcake Kevin (Russell Tovey).

As the series concludes tomorrow with a final wrap-up movie, we sat down with stars Murray Bartlett and Frankie J. Alvarez to discuss their experiences on Looking and the lasting impact they hope the show will have.

What first drew you to this project?

Murray Bartlett: I think it was when I saw Andrew Haigh’s film Weekend. I was really moved and touched, because I felt like it’s a very honest, very human kind of take on life. I really related to it. I feel like he brought that sensibility to the show, he and Michael Lannan. I just respond to that kind of stuff on screen — just very pared back, very honest kind of recognizable moments between people. I was really excited to be part of something that had that tone, and I think then having that tone with characters that are mostly gay was something very new.

Frankie J. Alvarez: I was doing a play out in Louisville at the Actors Theatre. I was playing a confederate soldier, and the play dealt with slavery. It was a very heavy, dark play I was working on. When I got the audition, it was for Richie at first, so I really liked a heart-forward character. For me, it was refreshing. It was a very different thing than I was playing at the time. I got the audition before Christmas break, so I had a few weeks to prepare. Weekend was on Netflix and they recommended that we watch the film. I watched Weekend, and that was the galvanizing point for me when I knew, oh my god, to work with a writer-director of such delicate and responsible, intelligent hands. I knew that this was going to be a really magical project. 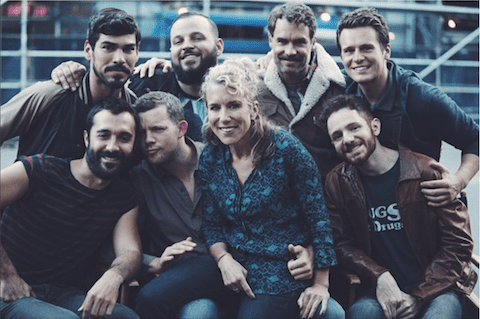 You guys have such a natural chemistry on screen. How did you build that relationship?

Bartlett: I think we were very lucky. We had a really great rapport, all of us, and became really good friends really quickly. I guess there’s some luck in that, but it’s probably orchestrated by Andrew Haigh and Michael Lannan bringing together a group of people that they knew were going to be harmonious and were going to work together well. I think it was kind of genius in that way. Not just in the cast, but in the crew and all the elements of the show brought together a really lovely group of personalities that fit together well. A lot of the actors live in New York, so between seasons we hang out a lot. It was interesting, by the end, I think they started to slant the writing toward our real-life friendships. They’d start to include a lot of things that were just sort of happening in real life, so it became this very seamless thing. It really felt like a bunch of friends hanging out together with a camera.

Alvarez: I think part of it is Murray has a theatre background, obviously Jonathan has a very prestigious theatre background, and me as well, so we had a sort of simpatico there from the beginning. Then we shot the pilot in May and we didn’t shoot the first season until September, so we had the whole summer. All three of us are New Yorkers, so we’re hanging out with each other’s partners, we’re going to movies, we’re going to Broadway shows, we’re having drinks — we’re having A LOT of drinks — and we liked each other so much, we kept hanging out. By the time season one began, we’re already percolating in a best friends kind of way.

We’re in the midst of a really contentious political season. Do you consider Looking to be a political show?

Alvarez: I think it’s quietly political. The show was never an issues-based show, and that was something Andrew and Michael were really conscious about. They wanted it to be a show about three gay men who are dealing with relationship issues, intimacy issues, career struggles, and if political things came about — gay marriage, Truvada, PrEP — they were dealt with in a nuanced, character-based way and not in a ‘Full House special episode’ way. I think certainly, because of the tragic events that happened in Orlando, when I saw the movie a second time, it was after it happened. Seeing those scenes in The Endup in the last third of the movie for me that was really affecting. As a Florida native, it was latin night, and you read the names and it’s all guys with last names just like mine. Watching those scenes at The Endup, it’s a moment of celebration, there’s also a break-up that happens, there are people that meet and hook-up for the first time. Those situations that happen in the film are exactly the kinds of things that were happening that night, and to have a horrible symbol of hatred come in and destroy that safe haven, it was shocking and saddening and maddening, frankly.

Bartlett: I think one of the great things about the tone of the show is that it focuses on these people’s lives and their loves and their intimacies, but interwoven into it are a lot of political ideas and issues that are very pertinent. I like the way they’re threaded through in a more subtle way. I think it’s smart. I feel like it’s easy for us to feel like we’ve made great strides in terms of gay rights and human rights, particularly when you live in New York or LA or San Francisco, but I feel like the veil has kind of been pulled back at the moment, and we’re seeing some dark sides of humanity. It’s scary. I think the more we focus on the things that unite us and the common elements that we all share of love and intimacy and relationships and connecting with each other, especially in the face of all this darker side of humanity kind of rearing its head, I think the better. 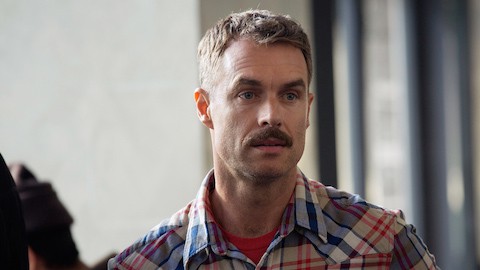 What do you make of some of the criticism the series faced?

Bartlett: I think the positive thing about that is that it brought up a lot of questions particularly in the gay community about how do we want to be represented, how are we represented, what are we ready for? How do we see ourselves? And it set up these interesting conversations between different sections of the gay community that liked the show or identified with it or didn’t. I think that’s healthy. It’s like holding a mirror up, check and see where we’re at. That’s what I took from it. 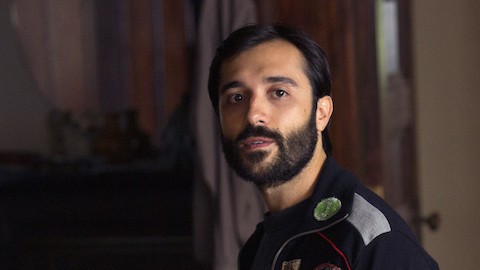 Agustín in particular received a lot of criticism from viewers. Did that surprise you?

Alvarez: I was very surprised. When Jonathan and I were building these characters, and especially this friendship that they’ve had, they’d been friends for a decade. They went to Berkeley together. We knew that there was an Agustín prior to the pilot. We knew that there’s no way this guy could’ve been this way and these two would’ve become friends, you know that something happened along the way when he moved to San Francisco, when he got into the art world and saw everyone else rise above him, it was like he needs to put on a kind of mask. He needs to be a certain version of himself. His journey in the series is obviously like the version that I’ve created of me isn’t working, isn’t getting me where I want to be, and maybe where I want to be isn’t actually who I am, so who am I actually? That was an amazing journey, but nobody knew that’s where it was going. … I think it was really lovely to see a character who always gets what he wants not really getting it and have him struggle through season two. I think that’s a testament to the writers. They really understand that this is the arc that we’re taking this guy on, and we’ve got to put him in this place in season one in order to get to this incredibly magical place in season two. I’m really proud to have been in probably the largest arc in the series.

Years from now, what would you like the legacy of Looking to be?

Bartlett: I want people to be saying that it had this very honest, authentic portrayal of intimacy and love and friendship that is universal, but that it was, hopefully, in some ways groundbreaking in showing intimacy between gay men, which I think is still quite new for our time.

Alvarez: There a lot of shows, shows that I like, like Ray Donovan or something, where it’s these sort of strong, silent, uber-masculine types who don’t share, don’t open up and are quietly tortured on the inside. We’ve come to worship these characters as a true sign of masculinity. That’s certainly not the way that I function with my friends, with all my straight guy friends. As a straight man in my relationship with my wife, that is not how I function. We are very open and honest with each other. Being open is also a trait of masculinity, just like being strong is a trait of femininity, as well. I think we have to get away from these gender normative labels, and I think, hopefully, Looking paves the way for storytelling that’s about male intimacy, not only sexual intimacy but also two friends opening up to each other.

Looking: The Movie premieres Saturday at 10 p.m. Eastern on HBO.