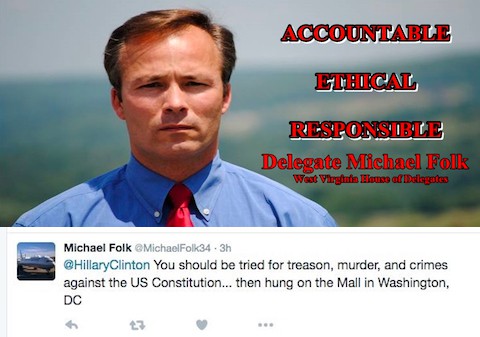 Michael Folk, a Republican legislator from West Virginia and a United Airlines pilot, has been suspended by United for sending a tweet to Hillary Clinton calling for her public execution by hanging.

This pilot has been removed from flying pending our investigation. We are appalled by his threatening comments. https://t.co/H1teA2nqsj

Said Folk’s Tweet: “You should be tried for treason, murder, and crimes against the US Constitution… then hung on the Mall in Washington, DC.”

Folk said he posted the tweet with regard to the FBI’s decision not to charge Clinton over her private email server.

Folk has since deleted the tweet and called it “hyperbole.”

“This pilot has been removed from flying pending our investigation,” United Continental Holdings Inc. tweeted Sunday. “We are appalled by his threatening comments.” …

Reached on his mobile phone, Folk declined to comment…

Folk began flying with United in 2008, according to his profile on LinkedIn. He is the vice chair of four committees in the West Virginia House of Delegates, including the Judiciary and Political Subdivisions. In a separate tweet, United said comments advocating harm to anyone don’t represent the company.
The West Virginia Democratic Party and other groups have called for Folk’s resignation.