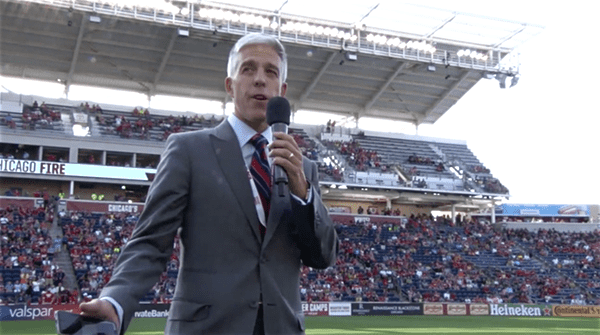 MLS soccer team the Chicago Fire has come out strongly against anti-gay chants, making it clear this week that the club will not tolerate fans shouting homophobic slurs during games.

General Manager Nelson Rodriguez took the field before a recent match to make the announcement. Rodriguez fittingly chose the club’s Pride Night to take a stand.

Chicago Tribune sports columnist and Fire fan John Kass was on hand for that game with his two sons and shared his reaction:

“An inappropriate and offensive chant has been used by some of our fans,” Rodriguez said. “It is unbecoming and certainly not reflective of the great city that we live in, and the best fans in major league soccer.

“Please be advised that if the chant continues and you are found to be participating, you are subject to removal. If you are near fans using offensive language, please advise stadium security so we can handle that as well.”

And all I could say was “bravo.”

There were a few boos. But most of us applauded him. And I didn’t hear that chant once during the game.

The chant that Rodriguez was referring to is one commonly used in Mexican soccer games. “Puto”, fans often shout, particularly singling out the opposing team’s goalie. For non-Spanish speakers, Kass explains that the term “means effeminate man whore. It is ugly and demeaning, directed at gay men in a macho culture…”

The chant has become deeply rooted in soccer culture and LGBT activists and allies have struggled to stamp it out.

Rodriguez told Kass in no uncertain terms, “This chant is offensive.”

“It’s vulgar, it’s inappropriate and it runs contrary I think — even in my short time here — to the spirit of Chicago, which at every turn I just find is warm and welcoming and friendly, and I’m of Latino descent.”

The chant, he said, “is not clever or creative, or catchy or appropriate in any way. Yeah, I’m not deaf. I heard a smattering of boos. But that’s a very small minority of fans, and I don’t care if they don’t return. In fact, personally, if they are booing the message as opposed to booing the messenger, go find another team to support.”

Previous Post: « Gay Corrections Officer Says He Was Fired After Suing Texas County for Discrimination
Next Post: Tom Goss Reveals Some Raw Truths in His New Clip ‘All My Life’ – WATCH »