Trans triathlete Chris Mosier stars in a new ad for Nike’s ‘Unlimited’ campaign, which showcases everyday and professional athletes who push themselves to the limit. 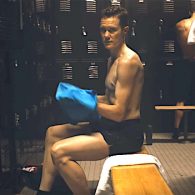 Chris Mosier began competing in the duathlon and triathlon in 2009 after he completed his first marathon, because he needed a greater challenge. “For me, triathlon is a true challenge because it is three different disciplines in one sport,” Mosier explains. “Triathlon is [also] a challenge for me because swimming is my weakest sport, and it’s the biggest mental challenge.”

At the age of four years old, Mosier became aware that his gender identity (male) and biological sex (female) didn’t align. Competing in female athletics, he didn’t feel as though he was competing as his authentic self. This truth has propelled Mosier on his journey.

“Everything that I’ve done in the last five, six years since I started to transition, has been with [a] “Just Do It” mindset,” he explains. “I didn’t know if I would be competitive against men; I just did it. Every success that I’ve had since then has shown me that anything is really possible. By not stopping myself, not limiting myself and just really going for it, I’ve learned a lot about myself and also had the opportunity to further the conversation on trans inclusion in sports.”

Mosier in 2015 became the first openly transgender athlete to win a spot on a U.S. National team. He also challenged the international transgender competition policy which resulted in a completely new set of guidelines for trans athletes.

Watch a behind-the-scenes video of the commercial up top: