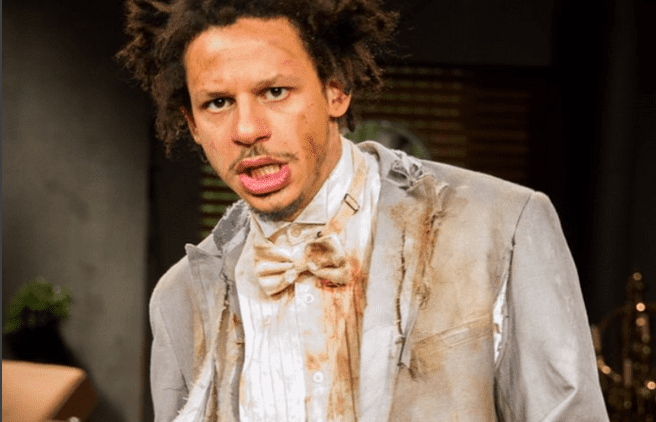 EXCLUSIVE interview with Eric Andre of Adult Swim’s The Eric Andre Show. Towleroad’s Mark Allen asks about the star’s LGBT fan base, his timely brand of comedy, and the question, “Is Eric Andre bisexual?”

You’ve probably seen Eric Andre’s face lately on posters for the new fourth season of The Eric Andre Show (pictured in a destroyed television studio), or Instagram photos of him lapping his tongue under the “Ranch Fountain” at his newly-opened Ranch Dressing Dispensary on Rivington Street in NYC, or perhaps being derided on Fox News and Brietbart.com for posing as a right-wing correspondent and crashing Alex Jones’ press booth at the 2016 Republican National Convention (where he got kicked out).

Or, you also may have seen more than his face, because Eric Andre loves going full frontal.

If you’ve never seen The Eric Andre Show before, brace yourself. Each episode begins with him violently destroying the studio set (often nude, and involving food, weapons, and fornication), then getting into fist fights with the cameramen and house band before exhaustedly plopping down behind a newly wheeled-out desk to treat his confused celebrity guests in horrible ways (who often storm out mid-interview).

It’s a fascinating train wreck of a television talk show. Is The Eric Andre Show the brave new future of entertainment? Is it yet another modern comedy excursion into the darker corners of surrealism? One thing’s for sure: you can’t look away. It’s The Phil Donahue Show meets Salò.

I thought I was alone in my appreciation of Eric Andre’s talents, but when I mentioned him to other gay friends, the reaction was always the same, “You’re a fan too? I thought I was the only one!” Turns out Eric has a sizable gay following. Why? Well, he’s sexy as hell, loves to get naked, and appears to have no boundaries. Queer people are naturally going to be curious.

Taboo-smashing female comics like Joan Rivers, Bette Midler and Amy Sedaris embraced queer sensibilities in their acts at the beginning of their careers while courting a mainstream audience, and counted gays as their initial fans.

Genre-breaking male comics like Andy Kaufmann, Lenny Bruce, and even Howard Stern all employed a more street-wise approach to queer subject matter, and inevitably attracted a sizable (if controversial) queer cult following, mostly because their mocking of society’s hang-ups branded them as outsiders.

he’s sexy as hell, loves to get naked, and appears to have no boundaries

The same can’t be said for male comedians like Andrew Dice Clay, whose one-dimensional jabs at “others” alienated them, and eventually his entire audience. The history of edgy male comics and gay subject matter is too complicated to map out here (Eddie Murphy anyone? Sam Kinison? How about Benny Hill?) So how do gay fans navigate it all?

Thirty years ago gays were some of the first to embrace the genius camp sensibility of Sandra Bernhard, but more recently, gays seemed almost late to the party appreciating Louis CK, long after his largely pro-gay stand-up routines were popular in hipster circles and already on television. Does the difference all boil down to gender?

Eric Andre employs adolescent-like mock violence, performance art hijinks, and cringe-inducing stunts to create what appears, on its surface, to be “bro comedy,” the type usually rife with groan-inducing racist, sexist and homophobic cliches. Yet Eric, who identifies as black and Jewish, seemingly pulls it off minus these tropes. Is a sequence of him getting fucked by Abe Lincoln homophobic? (he appears to be enjoying it). A few viewers might think so, but most probably won’t, especially considering Eric is the butt of the joke.

I chatted with Eric via email about his unhinged approach to entertainment, his queer following, his sexuality, and what dangerous surprises are in store on the new season of The Eric Andre Show (Fridays at midnight on Adult Swim).

Mark Allen: Your show is apocalyptic and over the top, you humiliate unsuspecting people on the street and studio guests in crass ways. But it’s interesting because nothing on the show comes across as racist or phobic. Does this just happen?

Eric Andre: I think because it’s coming from a silly place, and not a hateful place. I’m also an elderly Jewish lesbian trapped in a 33 year old nerd’s body.

being overly PC actually backfires and doesn’t allow people to cope with tragedy.

Do you think “homophobic” jokes in the 1980s are different than ones that might be perceived so today? What’s changed?

EA: All motivation is defined by intention. If the intention is to hurt, divide, or belittle, it’s wrong; if it’s an attempt to cope with or make sense of tragedy, it’s something different. If it’s commenting on society’s flaws, versus adding to society’s flaws, I think the audience can tell.

With that said, I do think homophobia in the ’80s was more rampant and socially acceptable, like with Sam Kinison or Andrew Dice Clay. Those guys are fucking bigots. Sam Kinison was a sexist homophobic piece of shit and I’m glad he is dead. I want to jerk off on his tombstone. 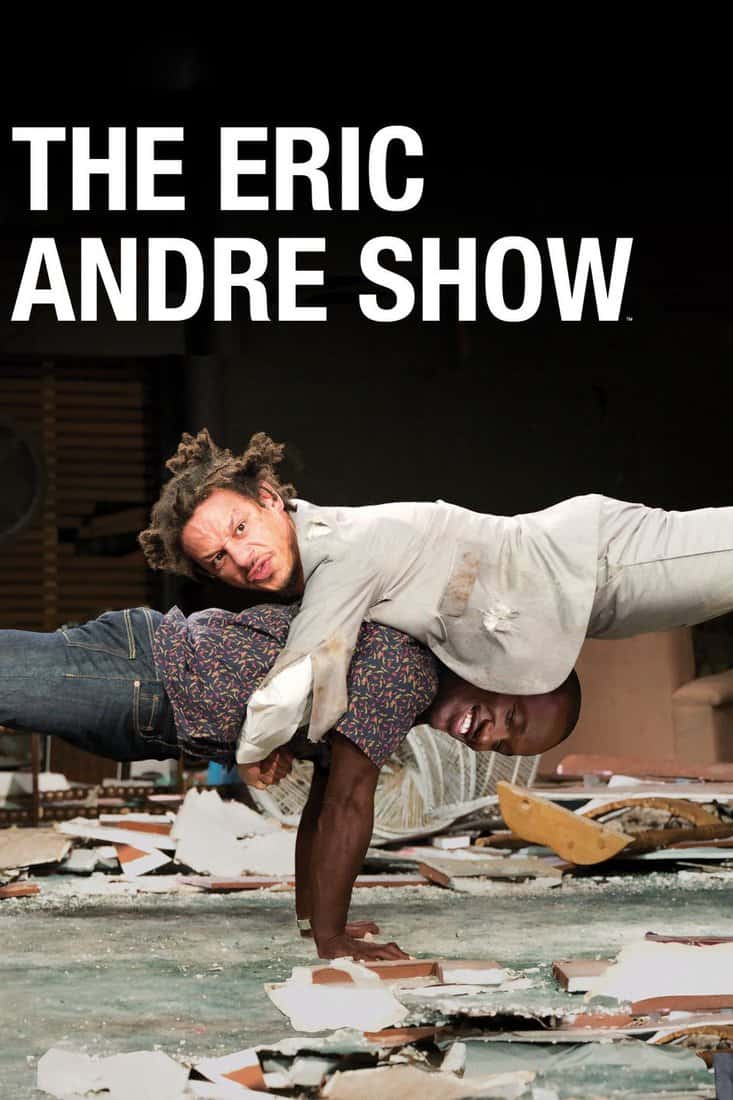 Do you think certain comedians can get away with stuff? Like some say Sarah Silverman is Jewish so she’s allowed anti-Semitic jokes with a wink.

EA: That seems to be the rule. You can make fun of your own a lot easier than someone else’s. But really it’s all about intention. I think if the joke is in good taste — it’s a good joke. If there’s an intelligence behind the joke —- it’s a good joke. When I’m watching South Park I don’t think it’s written by neo-Nazis. They know exactly what they’re doing. I think that being overly PC actually backfires and doesn’t allow people to cope with tragedy. It makes people more tense. We have to laugh. Jeff Ross talks about comedy being medicine – you don’t want to water it down, because it will no longer be effective.

95% of rappers are macho and homophobic. Hahaha. And sexist as shit!

Now there’s a Grindr headline. On your Instagram account you recently exposed and humiliated a follower who kept attacking you and your fans, using the word “faggot” a lot. You enlisted other followers to expose him. It’s not the first time you’ve done this. Is this part of the act or something else?

EA: I don’t think people know I actually read the comments on my IG.  Hence why dickheads come after me all the time.The best way to retaliate is to expose their bigotry. But all these assholes are brave on the internet. No one says that shit to my face. 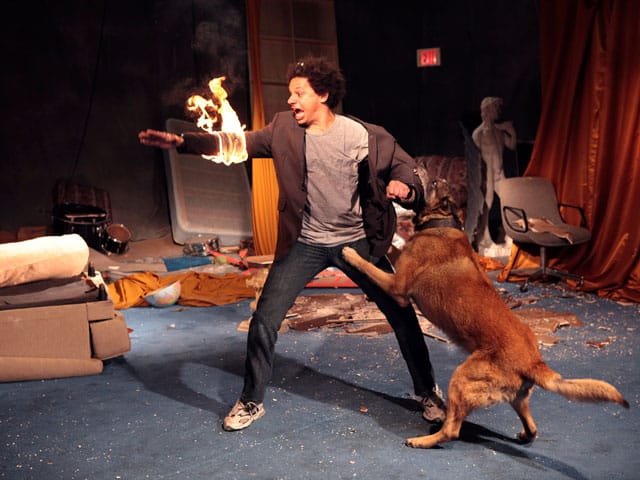 You do have a gay following. I think it’s because you get naked a lot and seem to have no boundaries.

EA: Perhaps! I also frenched a cop on the show. So that helps. A hole is a hole has always been my motto.

I’ll try to get that chant going at next year’s pride parade.

That’s one of your most famous stunts from season two, running into a deli pursued by a cop and as he arrests you you both start making out. People’s reactions were hilarious! The cop was played by out comedian James Adomian. Why did you choose him?

EA: I needed the performer to commit and look like a cop. James Adomian fit the bill. Plus he is a good kisser. 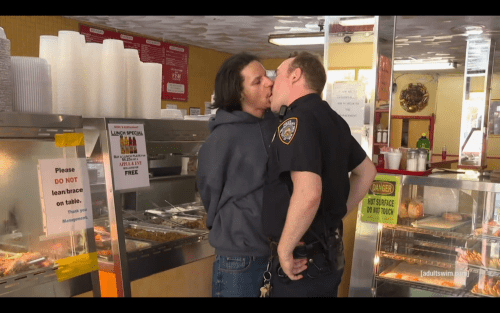 So anyway, today people can take hormones and have surgery and become whatever gender they identify with, and everything in between. A complex sexual spectrum seems possible, and it’s kind of mind-blowing. Do you think “gay” even mean anything anymore?

EA: I think everyone is bi, right? There’s no such thing as sexual orientation, or race, or gender. Those are all obsolete man-made concepts. I’ll say it again, a hole is a hole.

So Eric Andre, would you say you’re coming out as bisexual?

EA: I’ll fuck anything that moves.

EA: I put a Freddy Kruger glove up my ass and watched Pink Flamingos.

Did you go to Stella Adler? Okay different subject, you have good taste in rap. You’ve turned me onto a lot of weird rap artists I’ve never heard of on your Instagram. Why don’t more gays like rap?

EA: Because 95% of rappers are macho and homophobic. Hahaha. And sexist as shit!

Okay, now comes the part of the interview where I try and offend you.

What would your drag name be?

I, uh… I mean a friend of mine says he thinks your queer appeal is because you seem like an art school guy who likes to experiment and if somebody got you high enough you might… do stuff. Does this make you feel objectified?

A friend, a different one, says he likes you because you have “blow job lips.” Do you think my friend is being being sexist?

Another friend (total freak) says he wants to sit on your face until he crushes your skull. Don’t you think my friend is weird? 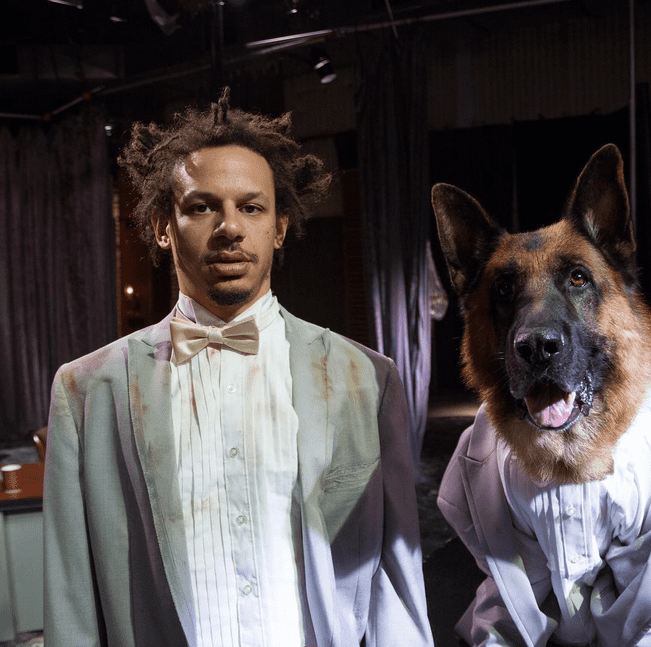 EA: Ranch is in the eye of the beholder…

Any message for your LGBTQQIP2SAA fans tuning into season four of The Eric Andre Show? Is there specific gay content?

EA: I try to sexually assault basketball star Roy Hibbert during an interview. There’s tons of male nudity this season. Don’t know if that’s enticing for the L’s but definitely for the G’s… and B’s… and some of the T’s! Can’t forget the QQIP2AA#H$’s!

What does LGBTQQIP2SAA stand for and why is it so long? I don’t even know, and I’m gay.

Do you think gays should carry guns?

John Waters has said being gay “isn’t enough anymore” to be culturally adventurous. Now that gays are more accepted in society many feel they’ve forsaken their edge as underground innovators, and others have become the boundary-pushers.

EA: Any gay person that thinks that should hang out in Russia for five minutes. It fucking sucks over there.

Well, my friends and I loved the first episode of the new season. Especially the zombie in the floor, and rapper T.I. getting so mad at you. I can’t wait to see you throw live rats at Stacy Dash this week!

Mark Allen is a writer, performer and filmmaker living in New York.

Previous Post: « New Trailer for ‘True Life: We Are Orlando’ Shows Pulse Survivors’ Struggles – WATCH
Next Post: Indie Drama ‘Moonlight’ Looks at What It’s Like to Grow Up Black and Gay in America – TRAILER »