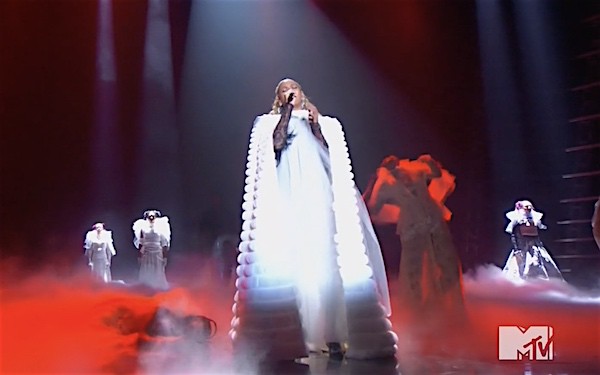 Beyoncé’s much-lauded “Lemonade” performance last night at the MTV Video Music Awards contained a section in which angels were ‘shot down’ into pools of red light, a reference to victims of gun violence. Earlier on the red carpet, she had walked with mothers of gun violence victims.

“It’s a shame,” said Rudy Giuliani on FOX & Friends when asked about the display. “It’s a shame.”

“You’re asking the wrong person because I had five uncles who were police officers, two cousins who were, one who died in the line of duty. I ran the largest and best police department in the world, the New York City Police Department. And I saved more black lives than any of those people you saw on stage by reducing crime and particularly homicide by 75 percent. Of which, maybe 4,000 or 5,000 were African-American young people who are alive today because of the policies I put in effect that weren’t in effect for 35 years. So if you’re going to do that, then you also should symbolize why the police officers are in the neighborhoods and what are you going to go about that? To me it’s two easy answers: a much better education and good job, and what the heck have you done like in Baltimore, when they all stood in Baltimore. I was sick when I saw all the politicians sitting, standing in Baltimore after the police situation and saying, ‘nobody’s done anything for this community in 50 years.’ Well, that is a heck of a thing to say, because they’ve been in charge for 50 years. And they have failed the community. I didn’t fail Harlem. I turned Harlem around. I didn’t fail Bedford-Stuyvesant, I turned it around. Go there now. Go walk in Harlem. Then flash back to 25 years ago and go to Harlem before I was mayor, and one was a place where crime was rampant and no national stores and now there’s a thriving community in Harlem.”