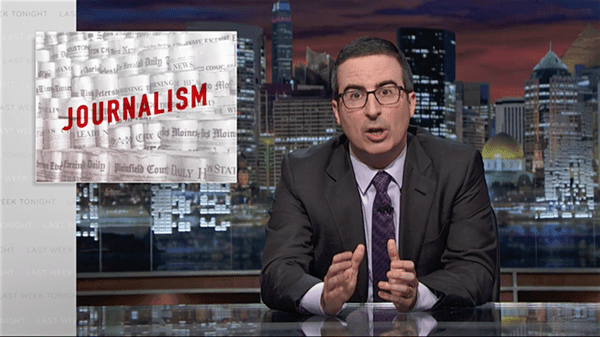 John Oliver devoted his weekly deep-dive to the waning business of print journalism, explaining why its demise would signal problems for all of us.

Pointing out statistics that show a dramatic decline in reporting on the state and local levels, Oliver underscored an argument made by The Wire creator David Simon–namely that if government officials are not covered by journalists, corruption will run amok. And while local reporting is neither glamorous nor glorified, it is essential to our democracy. Said Oliver,

“Not having reporters at government meetings is like a teacher leaving her room of 7th graders to supervise themselves. Best case scenario, Britney gets gum in her hair. Worst case scenario, you no longer have a school.”

As you may have guessed, staff and budget cuts in the print media world have been driven by a need to move content online. The problem is, online ad revenue has not made up for the huge loss of print ad revenue. Which means publishers are more desperate than ever and they’re chasing clicks rather than hard-hitting content. And, as Oliver said, “No one seems to have a perfect plan on how to keep newspapers afloat.”

Ultimately, however, the onus to keeping print journalism alive is on us. Said Oliver,

“A big part of the blame for this industry’s dire straits is on us and our unwillingness to pay for the work journalists produce. We’ve just grown accustomed to getting our news for free. And the longer that we get something for free, the less willing we are to pay for it. And I’m talking to you, the person watching this segment on YouTube using the wifi from the coffee shop underneath your apartment. You’re killing us!”

Oliver added, “Sooner or later, we are either going to have to pay for journalism or we are all going to pay for it.”