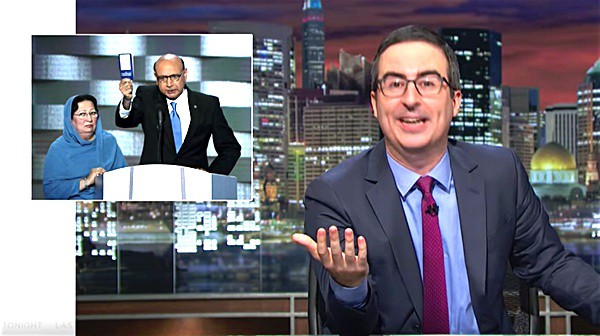 On Last Week Tonight, John Oliver took a thorough look at all the speeches in both the Republican and Democratic conventions, noting how ‘topsy-turvy’ the two weeks have been, as the RNC is usually seen as the more optimistic and patriotic of the two but this year has been thrown into disarray by the carrot-headed fascist.

But what touched Oliver the most – as it did many of us – was the speech by Khizr Khan.

“That engendered in me a level of emotion I did not think was possible after 16 months of this depressing campaign and 39 years on earth as a British person,” said Oliver, noting the power of Khan’s offer to loan Donald Trump a copy of his pocket-sized Constitution.

“That is an American founding document being inspirationally used as a middle finger,” Oliver exclaimed. “I did not know that was technically possible.”

And Oliver laid into Trump for a reaction that was equally astonishing in its ignorance and racism, attempting to play into stereotypes that Muslim women are suppressed by their husbands.

Here’s what Trump said if you missed it:

“OK. For a start, his wife has explained that she chose not to speak because she gets too upset when she sees images of her dead son’s face, you F**KING a**hole.”

And Oliver laid it down:

“They are self-serving half-truths from a self-serving half-man who has somehow convinced half the country that sacrifice is the same thing as success…Honestly, the main takeaway from these two weeks is that, incredibly, we may be on the brink of electing such a damaged, sociopathic narcissist that the simple presidential duty of comforting the families of fallen soldiers may actually be beyond his capabilities—and I genuinely did not think that was a part of the job that someone could be bad at.”

Previous Post: « Frank Ocean Taunts Fans with Video Loop, Clues, Ahead of ‘Boys Don’t Cry’ Release?
Next Post: ‘Cats’ Is Back on Broadway and Trippy As Ever: REVIEW »