Kubo and the Two Strings begins with Kubo’s mother, navigating treacherous waves by slicing them in half with one melodramatic strum on her magical shamisen. The instrument has three strings, not two, but the title can wait. It’s time to watch. Kubo’s (Art Parkinson) narration warns us to do so closely.

That’s a handy if redundant warning because who is going to blink during a Laika movie? The animated studio reliably crafts spectacularly intricate stop motion (with some CG boosting). When Kubo’s mother splits the waves desperate to save the baby in her boat, it was hard not to think of Moses, twice over, both a babe in on the water and an ocean-parter. Religiously suggestive folklore with magic turns out to be perfect fit for Laika because they always bring the eye popping images and movie magic. 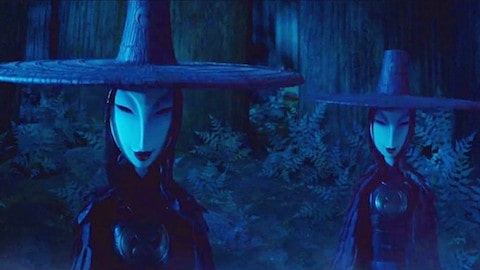 We jump ahead a few years to Kubo’s childhood. He’s now a fine storyteller who magically commands origami with his mother’s shamisen to help weave his tales. It doesn’t take a genius to realize that the story he’s repeatedly telling, about a samurai named Hanzo and an evil Moon King is his own (how much so he doesn’t yet fully grasp) and the movie we’re watching is also that story, folding itself into new shapes like the origami.

It’s a pity then that the production is marred by unfortunate voice casting. Animated films have been undermining themselves for some years now with their heavy reliance on famous faces, when what they need is dexterous voices.

McConaughey is funny at times in a dual role but his ultra familiar Texas drawl is quite an uncomfortable fit for an animated Asian story (reminding us frequently that we’re watching yet another movie wherein Asian roles were cast with white actors). Worse still is Charlize Theron, a great actress surely, but she isn’t great because of the timbre of her vocal chords. Her voice work in the film’s most crucial dual role is quite dull. These decidedly unmagical familiar voices do the unusual and mysterious story no good whatsoever. 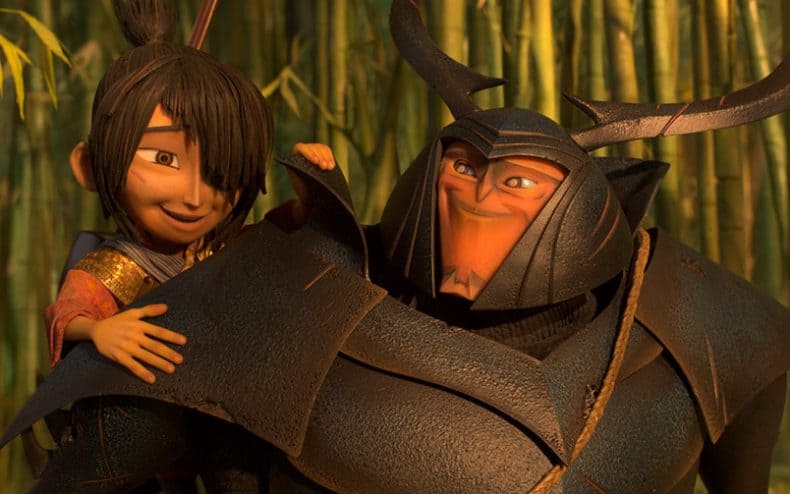 And besides, who honestly goes to animated movies based on how famous the voices are? They don’t work that way unless it’s a very unique case (like Ellen DeGeneres in Finding Dory) so studios are just wasting their money on huge stars.

The story, too convoluted for its own good perhaps, rescues itself from its arguably clumsy plot and off-voices with intermittent movie magic and interesting characters like a beetle warrior, a bossy monkey, the Moon king and his daughter witches in masks.

Kubo is also blessed with a bravely melancholy undertow that sets it apart yet again from other animated films and actually lets it speak to themes of grief, death, and forgiveness. If you blink towards the final battle, (Kubo did warn you not to) you might miss the title bit when Kubo arms his shamisen with two special strings. It’s a beautifully judged moment, braiding the film’s themes into its climactic set piece.

Laika, the animated studio that brought us Kubo has now made four full length features. The first three Coraline (2009), ParaNorman (2012), and The Boxtrolls (2014) each earned a deserved Oscar nomination for Best Animated Film. They’ve lost to either Pixar and Disney features each time.

Kubo and the Two Strings is magnificent looking but, lacking the instant-hooks and clever conceit of a Zootopia or the behemoth success and easy heart of a Finding Dory, it doesn’t look likely to change Laika’s fate with the public or the Oscars. All things considered, even if I sadly admit that I think it’s the least of their four features, Kubo is another reminder that we need Laika in our movie world. Their commitment to true originality, hands on craftsmanship, and in-movie specificity sets them far apart from all the corporate driven animation moviegoers regularly flock to in much greater numbers and that Oscar regularly rewards.

Like Kubo, this tremendous group of artists are searching and striving to master their considerable magic. One year soon it will be their turn to triumph.