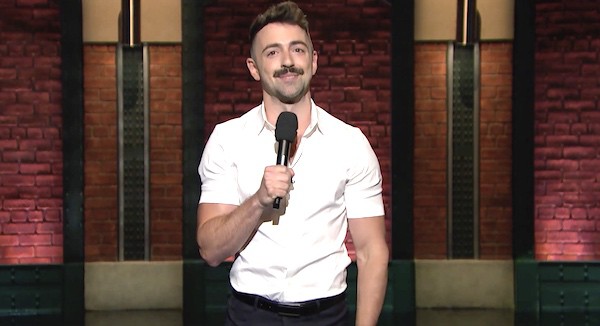 Seth Meyers welcomed actor and comic Matteo Lane to Late Night last week where he introduced the audience to his unique show biz experience. He says the life of a comic is stressful because agents always want you to be an actor. On top of that, he says his “gay voice” is constantly bombing auditions for him.

Matteo says that nobody cares if you know your lines, or which school you attended, because show biz is all based on your looks. He says that the only part he might be typecast for is that of a deli worker. His life, he suggests, has been pretty much all about being different, something he became aware of as a kid running around in his cousin Meghan’s ruby red slippers and avoiding orders from his Uncle Bob to go outside and play football like all the other boys.

Matteo also says his goal for 2016 is “is to find a boyfriend and eat more vegetables.”

So for those of you into the “Luigi” look: