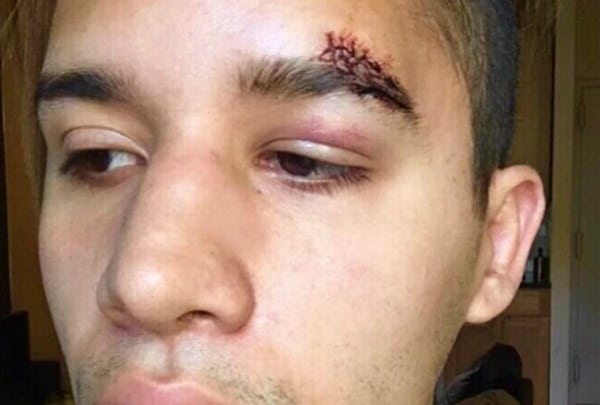 Manhattan resident Omar Villalobos says six New York police officers who were working on 42nd street did nothing after he was punched by a man who used an anti-gay slur before the alleged attack.

“He had been staring at us, really giving us a very hateful glare,” Villalobos remembered. “I was telling Natasha that I had never seen someone look so hateful. In my head, I very much dismissed it, though, because there’s crazy people in New York all the time who can’t control their facial expressions. But then out of nowhere, we just heard mumbling and then the word fa**ot.’ As I go to respond, he punches me right on my forehead, splitting me open right above my right eyebrow.”

Villalobos claimed that after the assault, his attacker — a blonde-haired, blue-eyed man who appeared to have been in his 40s — didn’t even try to escape.

“Natasha was trying to get the cops to arrest him, and then two bystanders even came over to try and get [the officers] to help, and one of the cops goes, “All they’re going to do is put him in the mental clinic and then he’ll be back on the street in no time.’”

According to the Post, the NYPD Hate Crimes unit has launched an investigation of the incident but not the reaction of the police officers, who, according to Villalobos “said they were there for terrorist attacks, not homeless people.”

Villalobos required six stitches according to the report.

Previous Post: « What is Nick Denton Doing After Gawker?
Next Post: Courtney Act Goes to a Trump Rally, Finds Likable People But Not Many Facts – WATCH »