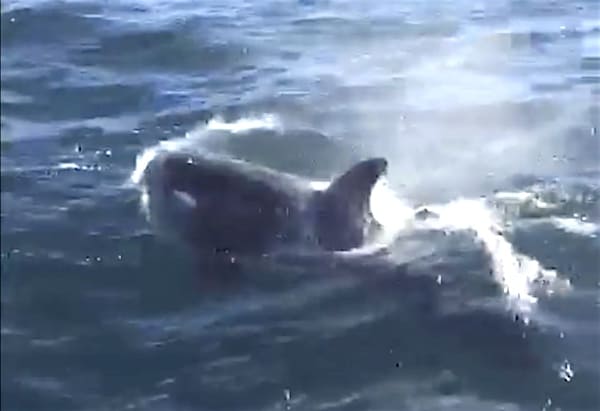 A group of tuna fishermen shot video this week of something very unusual: a pod of orcas swimming in the waters off of Chatham, Massachusetts, on Cape Cod. And they got very excited about it.

“Tuesday (8/23/16) while tuna fishing 12 miles off Chatham, directly north of the BC Buoy, we came across a pod of orcas. It was hard to count exactly how many, but there were definitely 4 different whales. One was significantly bigger than the others, one was very small which we thought was a baby, and the other two we could only tell they were different by their dorsal fins. The water temperature was 66 degrees at the time. Also while we were mixed in with whales we had 3-4 tuna marks on the fish finder so immediately we thought they may have been feeding on tuna. These whales were not boat shy whatsoever, as you can see in the video. We continued trolling and they swam next to the boat several times. One whale breached 40 feet from our bow. We must have been mixed in with the whales for about 10-15 minutes and as we trolled north they moved with us.”

The only other orca sighting Aquarium staff are aware of this summer locally came in July, when a commercial fisherman took a photo of a 6-foot slick black dorsal fin 13 miles northeast of Chatham. That orca, which was alone, was later identified as “Old Thom,” a 30-foot-long whale known to researchers.

Seeing a group of killer whales so close to the coast, officials said, is a different story.

“It’s a lucky and rare sighting to be able to see one, let alone a couple,” Hamilton said. “Their enthusiasm was warranted.”