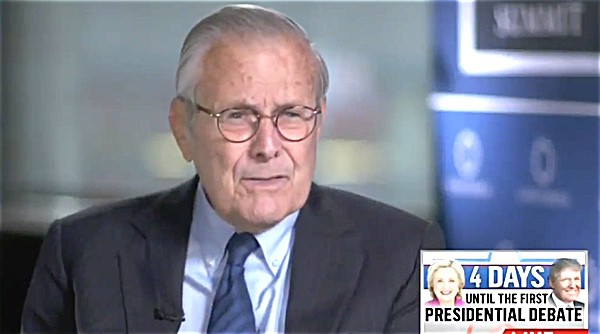 Donald Rumsfeld suggested that the reason President George H.W. Bush has decided that he’s voting for Hillary Clinton is because he’s old (senile?).

RELATED: President George H. W. Bush Will Vote for Hillary Clinton, According to a Kennedy

“He’s up in years,” said the former Defense Secretary, when asked about #41’s decision.

Rumsfeld offered the same response about Bush “getting up in years” when pushing back last year at criticism from the former Republican president over Rumsfeld’s service in the George W. Bush administration.

“He gets his choice, and if that’s true, he’s made his choice. Then, fine, he can go do what he wants to do,” Rumsfeld said of the elder Bush supporting Clinton over Trump.