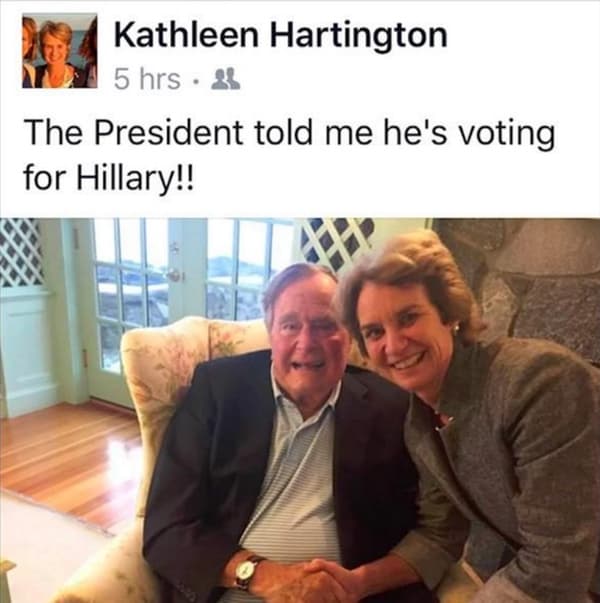 President George H. W. Bush plans to vote for Hillary Clinton, according to a member of the Kennedy family.

Bush, 92, had intended to stay silent on the White House race between Clinton and Donald Trump, a sign in and of itself of his distaste for the GOP nominee. But his preference for the wife of his own successor, President Bill Clinton, nonetheless became known to a wider audience thanks to Kathleen Hartington Kennedy Townsend, the former Maryland lieutenant governor and daughter of the late Robert F. Kennedy.

On Monday, Townsend posted a picture on her Facebook page shaking hands next to the former president and this caption: “The President told me he’s voting for Hillary!!”

Politico confirmed the report about #41 with Townsend in a phone call: “That’s what he said.”

Previous Post: « Chelsea Bomber Hated Gays, According to the Mother of His Daughter: REPORT
Next Post: Skittles Corrects Donald Trump Jr After Deplorable Tweet: ‘Skittles are Candy. Refugees are People.’ »