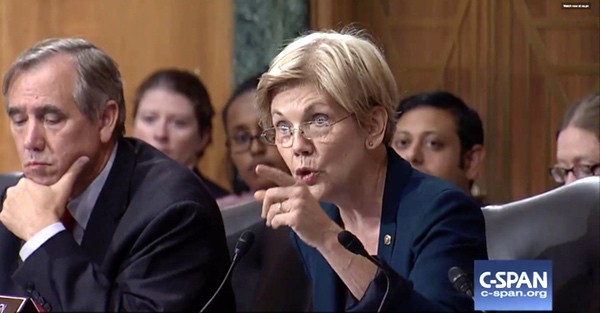 Senator Elizabeth Warren delivered a riveting sermon to Wells Fargo CEO John Stumpf yesterday over the massive scam by the company to increase its cross-selling numbers by creating millions of fake accounts under customers’ names.

More than 5,000 employees were said to be involved in the cross-selling operation but, as Warren points out, nothing has changed in the top echelon of leadership.

“Here’s what really gets me about this, Mr. Stumpf. If one of your tellers took a handful of $20 bills out of the crash drawer, they’d probably be looking at criminal charges for theft. They could end up in prison. But you squeezed your employees to the breaking point so they would cheat customers and you could drive up the value of your stock and put hundreds of millions of dollars in your own pocket.

“And when it all blew up, you kept your job, you kept your multi-multimillion-dollar bonuses, and you went on television to blame thousands of $12-an-hour employees who were just trying to meet cross-sell quotas that made you rich. This is about accountability. You should resign. You should give back the money that you took while this scam was going on, and you should be criminally investigated by both the Department of Justice and the Securities and Exchange Commission. This just isn’t right.”

.@SenWarren #WellsFargo CEO: "You should resign. You should give back the money that you took…" pic.twitter.com/aPZViWGJIN