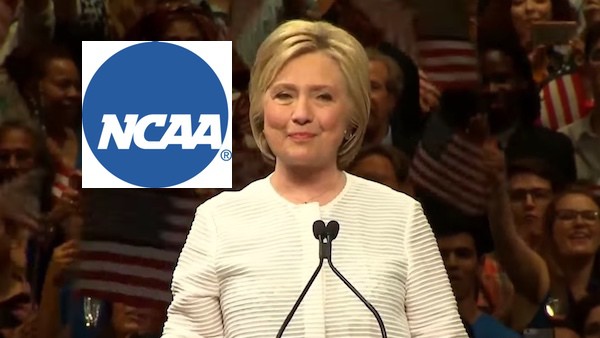 Hillary Clinton tweeted support for the NCAA’s decision to pull all of its 2016-17 championship events from North Carolina in light of the anti-LGBT HB2 law.

Said Clintonon Tuesday morning in a tweet she signed herself: “The @NCAA is right to pull tournament games from North Carolina because of the anti-LGBT HB2 law. Discrimination has no place in America. -H”

The @NCAA is right to pull tournament games from North Carolina because of the anti-LGBT HB2 law. Discrimination has no place in America. -H

Said the NCAA in a press release last night:

“Fairness is about more than the opportunity to participate in college sports, or even compete for championships,” said Mark Emmert, NCAA president. “We believe in providing a safe and respectful environment at our events and are committed to providing the best experience possible for college athletes, fans and everyone taking part in our championships.”

The board stressed that the dynamic in North Carolina is different from that of other states because of at least four specific factors:

North Carolina laws invalidate any local law that treats sexual orientation as a protected class or has a purpose to prevent discrimination against lesbian, gay, bisexual or transgender individuals.

North Carolina has the only statewide law that makes it unlawful to use a restroom different from the gender on one’s birth certificate, regardless of gender identity.

Five states plus numerous cities prohibit travel to North Carolina for public employees and representatives of public institutions, which could include student-athletes and campus athletics staff. These states are New York, Minnesota, Washington, Vermont and Connecticut.

“As representatives of all three divisions, the Board of Governors must advance college sports through policies that resolve core issues affecting student-athletes and administrators,” said G.P. “Bud” Peterson, Board of Governors chair and Georgia Institute of Technology president. “This decision is consistent with the NCAA’s long-standing core values of inclusion, student-athlete well-being and creating a culture of fairness.”