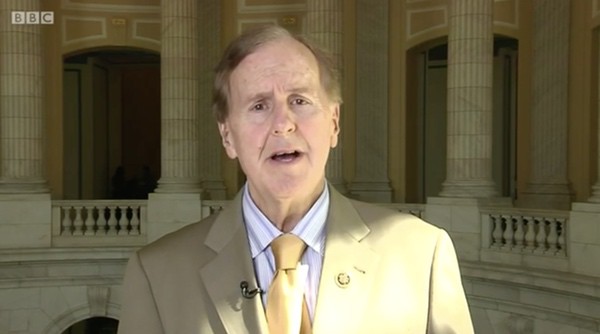 North Carolina GOP Congressman Robert Pittenger appeared on BBC for an interview last night about the protests that have engulfed the city of Charlotte following the shooting of Keith Scott.

Said Pittenger: “The grievance in their mind is the animus, the anger. They hate white people because white people are successful and they’re not. I mean, yes, it is, it is a welfare state. We have spent trillions of dollars on welfare, and we’ve put people in bondage so they can’t be all that they are capable of being.”

One of the most ignorant statements I have ever heard. Ashamed to have served with this fool in the #ncga. #ncpol https://t.co/nZJe6t4b69

Pittenger tried to walk back the comments on Twitter a few hours later:

What is taking place in my hometown breaks my heart. Today, my anguish led me to respond to a reporter's question in a way that I regret

I apologize to those I offended and hope we can bring peace and calm to Charlotte.

My intent was to discuss the lack of economic mobility for African Americans because of failed policies.