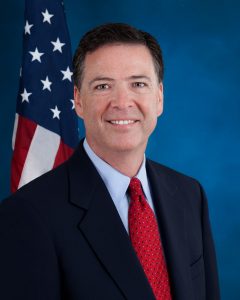 FBI Director James Comey opposed the U.S. government releasing a statement about Russia’s attempt to influence the presidential election because, Comey argued, the announcement would come too close to election day.

Proximity to election day did not, however, stop Comey from sending a letter to Congress on Friday stating the FBI was investigating new emails purportedly tied to Hillary Clinton–emails that were later discovered to have been found on Anthony Weiner’s computer during an investigation into his sexual misconduct.

The Department of Homeland Security and The Office of the Director of National Intelligence did ultimately issue a statement on October 7, saying the conclusion among the American intelligence community was that Russia was behind the hacking of the D.N.C. and other U.S. entities.

“The U.S. intelligence community is confident that the Russian Government directed the recent compromises of emails from US persons and institutions, including from US political organizations…These thefts and disclosures are intended to interfere with the US election process.”

Comey reportedly agreed with the statement’s conclusion. However, the FBI’s name was left off the report, which Comey wanted if it were to be released.

An FBI spokesperson declined to comment on Comey’s role in the decision making surrounding the Oct. 7 statement.

According to [a] former [FBI] official, Comey agreed with the conclusion the intelligence community came to: “A foreign power was trying to undermine the election. He believed it to be true, but was against putting it out before the election.” Comey’s position, this official said, was “if it is said, it shouldn’t come from the FBI, which as you’ll recall it did not.”

Comey took a different approach toward releasing information about the discovery of emails on a laptop that was used by former Congressman Anthony Weiner and his estranged wife Huma Abedin, the official said. “By doing a press conference, and personally testifying and giving his opinion about the conduct, he made this about James Comey and his credibility,” the official said. “You can see why he did it, from his perspective, once he had had that press conference.” 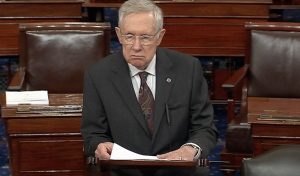 Earlier on Monday, Senate Minority Leader Harry Reid called on Comey to release info the FBI has on Trump’s ties to Russia:

In my communications with you and other top officials in the national security community, it has become clear that you possess explosive information about close ties and coordination between Donald Trump, his top advisors, and the Russian government – a foreign interest openly hostile to the United States, which Trump praises at every opportunity. The public has a right to know this information. I wrote to you months ago calling for this information to be released to the public. There is no danger to American interests from releasing it. And yet, you continue to resist calls to inform the public of this critical information.

Reid also wrote Comey to let him know he may have violated federal law known as the Hatch Act, which prohibits federal officials from using their authority to influence elections.

UPDATE. The Department of Justice has responded to requests from congressional lawmakers about the emails, saying it will devote the needed resources to provide a quick review of the emails cited in Comey’s letter.

The Justice Department sent a brief letter to six lawmakers Monday, saying that the department will work closely with the FBI to take “appropriate steps as expeditiously as possible” in the renewed investigation into emails potentially tied to Hillary Clinton’s private email server.

The three paragraph letter written by Assistant Attorney General for Legislative Affairs Peter J. Kadzik said that the department and FBI will “dedicate all necessary resources”to the investigatoin, but provided no further details about the contents of the emails or whether they are significant. […]

Kadzik was responding to a letter sent Saturday to Lynch and Comey from Democratic Sens. Thomas R. Carper (Del.), Patrick J. Leahy (Vt.), Dianne Feinstein (Calif.) and Benjamin L. Cardin (Md.) asking that law enforcement authorities provide by Monday more details of the investigative steps being taken by the FBI, the number of emails involved and what is being done to determine how many of the emails are the same as ones already reviewed by the FBI.