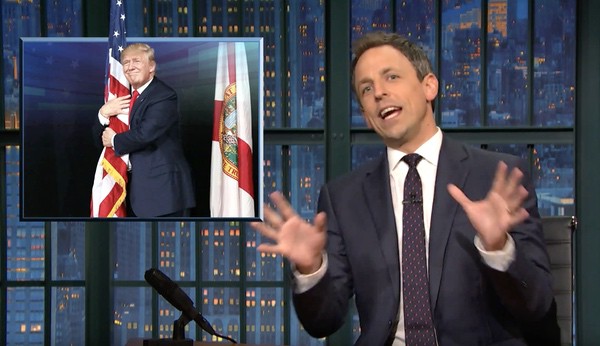 Seth Meyers dove into the identity of the Republican Party and what Trump’s directives to conservatives to ignore the mainstream media and embrace conspiracy theorists have done to it.

First Meyers looks at Megyn Kelly’s smackdown of Newt Gingrich, which he loved.

“So great. Telling someone to work on their anger issues is such a good burn because it’s only going to make them angrier.”

Meyers says the GOP has to look within to change the identity of their party:

“Here is the crucial question Republicans will have to ask if they want to fix their party. How did this happen? One culprit they might want to look at is the right-wing media bubble that fed their audience a mix of conspiracy theories and racial resentment, and discredited all mainstream news sources as untrustworthy.”

Which leads him to the National Enquirer‘s lead story this week: 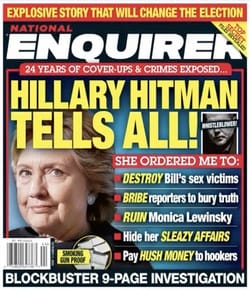 “If Trump’s supporters were to only read the internet this week, what stories would they have been exposed to that the mainstream media ignored? Well, there was one bombshell story that was extremely popular on right-wing websites like The Drudge Report this week and it came from The National Enquirer. The story was titled, “Hillary Hitman Tells All!” and claimed among other things that Hillary “is a secret sex freak who paid fixers to set up illicit romps with both men AND women!”

“Hannity and Limbaugh aren’t the only right-wing media personalities Trump has courted. There’s also radio host and conspiracy theorist Alex Jones, who has interviewed Trump on his show, and who this week offered a fascinating new theory for how that tape of Trump bragging about sexual assault with Billy Bush in 2005 came into existence. “

“That’s right. He thinks Billy Bush is a CIA agent who goaded Trump into bragging about sexual assault in 2005, knowing he’d run for president 11 years later, in the famous operation Zero Dark Talkin’ Dirty. But this kind of paranoid thinking is becoming all too common in the right-wing media, and now they’re trying to paint Hillary Clinton as an election-rigging, criminal sex freak in order to make her look illegitimate from day one, just like they tried to make President Obama look illegitimate.”

And talks of impeachment are already underway. So, with the GOP, everything old is new again.