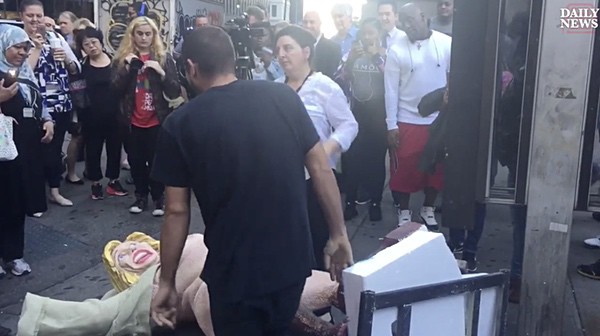 Commuters near lower Manhattan’s Bowling Green subway station fought over and toppled a obscene statue of Hillary Clinton that had been placed near a subway entrance, the New York Daily News reports:

The grotesque caricature of the Democratic candidate appeared outside the Bowling Green station during morning rush hour on Tuesday and shows Clinton with hoofed feet and a Wall Street banker resting his head on her bare breasts.

“To put something up like this in front of my work place…I shouldn’t have to see this,” she later told the Daily News, fighting back tears as she gestured toward the crude figure.

According to the paper, NYPD’s counterterrorism unit showed up and ordered the artist to take the statue down because he had no permit. The paper also said it was unrelated to a naked statue of Donald Trump which had been erected in Union Square in August.

Previous Post: « Hillary Clinton Considered Out Apple CEO Tim Cook as Running Mate
Next Post: Frank Ocean Will Not Be Getting Any Grammys Because He Missed a Deadline »