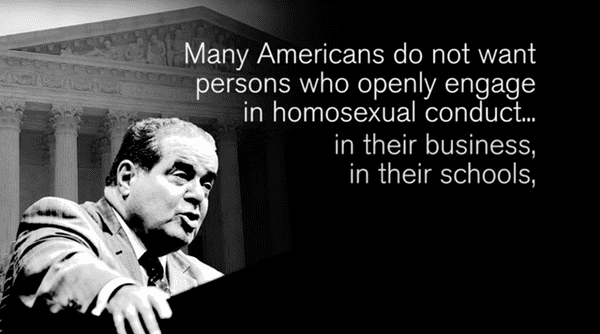 The Human Rights Campaign unveiled a new ad attacking Donald Trump for saying in the last presidential debate that he would appoint Supreme Court justices “in the mold of Justice Scalia.”

As our readers are no doubt aware, Justice Scalia was a stalwart and vocal opponent of LGBT rights who frequently denigrated LGBT people in his public remarks and in his opinions.

REWIND: Remembering Antonin Scalia: His 7 Most Hateful and Homophobic Remarks

“Donald Trump’s dangerous and hateful vision for our Supreme Court is to appoint justices in the model of Antonin Scalia — a man who spent his entire judicial career disparaging LGBTQ Americans, calling us murderers and polygamists,” said HRC President Chad Griffin. “The future of the Supreme Court is at stake in this election, and we cannot allow Donald Trump to nominate a new generation of anti-LGBTQ judges who would perpetuate Justice Scalia’s legacy of discrimination. Hillary Clinton has long been a champion for the LGBTQ community and is the only candidate in this race who would ensure that the Supreme Court continues its historic progress securing equality for all Americans.”

Earlier this month, Griffin penned an op-ed detailing the terrible risk of giving Donald Trump the power to appoint judges. He noted that Trump’s list of potential Supreme Court nominees includes judges who have consistently ruled in favor of allowing discrimination against LGBTQ Americans.

With just 20 days until Election Day, the stakes couldn’t be more clear. Justice Scalia, during his three decades on the Supreme Court, used his position to further a narrow view of the Constitution, advocating for blatantly discriminatory laws targeting the LGBTQ community, limiting its right to privacy, and attempting to block marriage equality.