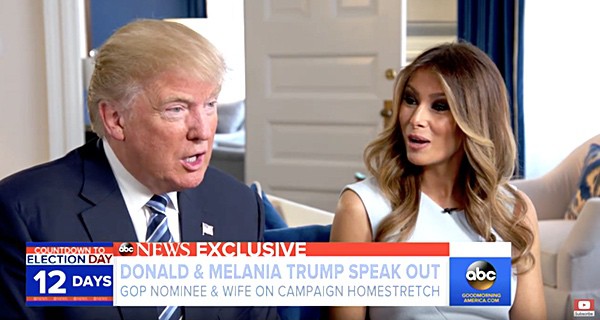 Melania Trump was surprised by some news in an interview she did this morning with GMA’s George Stephanopoulos when Donald Trump informed her of some plans:

Melania said the worst moment of the campaign was the “dishonest media” and Trump agreed. “They’ll skew it so unfairly…the media poisons the mind of the American voter.”

On the subject of his sexual abuse accusers, Trump claims, “I can’t apologize for something that I didn’t do.”

Replies Stephanopoulos, “But it’s more likely to go away if you don’t sue.”

Trump also says that the 281 people, places, and things that he has insulted on Twitter that were published in a comprehensive index by the New York Times “deserved it.”