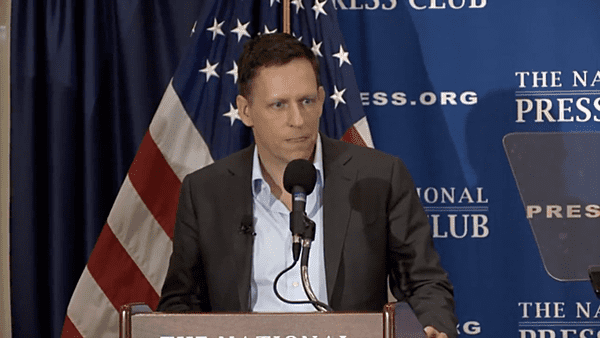 Gay Republican billionaire and Donald Trump supporter Peter Thiel says he has had not had conversations with Trump about LGBT rights and the Supreme Court, yet remains confident that Trump will expand and not reduce rights if elected president.

Thiel made his remarks during a event at the National Press Club in Washington where he gave prepared remarks and took questions about his support of Trump, his funding the lawsuit that brought down Gawker, and more.

When conversation turned to Trump’s stance on LGBT issues and whether he would appoint anti-LGBT justices to the Supreme Court, Thiel said, “I don’t have conversations with Mr. Trump on that particular subject.”

Asked whether he had received private assurances from the Republican nominee that he would protect recent civil rights advances for the gay community, Thiel said he had had no such conversations, but that he was confident that Trump would defend an expansion of gay rights.

He said that Trump represents “a sea change from Bush 43,” referring to President George W. Bush. Thiel pointed to Bush’s negative campaigning over gay rights in 2004 in explaining his comments.

Thiel made waves at the Republican National Convention this year when he publicly endorsed Trump, slammed “fake culture wars”, and said of transgender bathroom rights, “who cares?”

Said Thiel at the time, “I don’t pretend to agree with every plank in our party’s platform but fake culture wars only distract us from our country’s decline, and nobody in this campaign is being honest about it but Donald Trump.”

In September, reports circulated that Thiel was telling friends Trump would appoint him to the Supreme Court if elected president.

More recently, Thiel donated $1.25 million to Trump’s campaign on the heels of the ‘P—y’-gate scandal.

Throughout the campaign, Trump has courted the anti-LGBT vote. Most alarmingly, he released a list of justices he would appoint to the Supreme Court, justices that would be bad news for LGBT people.

CNBC has more on Thiel’s latest defense of Trump:

“No matter what happens in this election, what Trump represents isn’t crazy and it’s not going away,” he said, according to prepared remarks. “He points toward a new Republican Party beyond the dogmas of Reaganism. He points even beyond the remaking of one party to a new American politics that overcomes denial, rejects bubble thinking and reckons with reality.

“When the distracting spectacles of this election season are forgotten and the history of our time is written, the only important question will be whether or not that new politics came too late.”