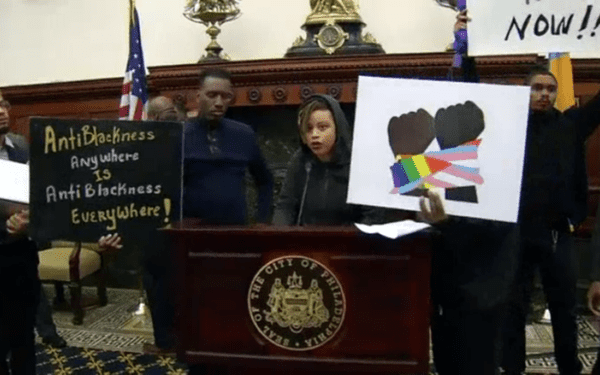 Protesters overtook a pride flag raising ceremony in Philadelphia in a demonstration against racism within the city’s LGBT community.

The protest comes on the heels of a recent controversy involving local gay bar Icandy. As previously reported, video leaked last month of Icandy owner Darryl DePiano using racial slurs to describe black patrons. De Piano confirmed that it was him in the video and apologized in a statement released on Facebook.

Protests took place outside Icandy after the video circulated online. Icandy and other bars in Philly’s gayborhood were previously accused of having a racist dress code that specially banned guests from wearing Timberland boots.

The pride flag protest took place on Sunday, October 9, and alleged that Philadelphia Mayor Jim Kenney and his administration are in denial about racism in the city’s LGBT community.

We’ve come a long way as a City since the LGBT flag raising started in 2008. The office of @PhillyLGBTgov is now enshrined in our charter. pic.twitter.com/a2zB4KFyaJ

The protesters interrupted the city’s seventh annual flag raising ceremony in the Mayor’s Reception Room. The ceremony is normally held outside City Hall but was moved indoors on Sunday due to rain. The flag raising coincides with the city’s annual OutFest.

Mayor Kenney and other officials left the room once protesters took over the event.

Said Kenney in a statement,

Discrimination in the Gayborhood and across the city is not something that one person or one office can be expected to solve on its own – it’s on all of us – and I hope the hearing that the Philadelphia Commission on Human Relations is holding on racism in the Gayborhood will start to move that ball forward. I intend to be there to do my part in ensuring that it does, and I encourage all others that are invested in change to attend as well.”

Have a long way to go. Gayborhood should be sanctuary for LGBT community, but all are not welcome. And, until they are, I will not go there.

He also added that he believes the Philadelphia “LGBT community will overcome this hate, because when this community comes together and works together, they are unstoppable.”

I know LGBT community will overcome this hate, because when this community comes together and works together, they are unstoppable.

NBC News also reports that the city’s Office of LGBT Affairs, headed by former assistant district attorney Nellie Fitzpatrick “issued a statement Sept. 29 after receiving what it called ‘reports of discriminatory practices by businesses in the Gayborhood, and the use of racist and homophobic slurs against members of the LGBT community.'”

A public hearing addressing racism and discrimination in Philadelphia’s gayborhood is scheduled for October 25. The city has subpoenaed a number of local business owners to appear at the hearing.

Watch footage of the protest, below.