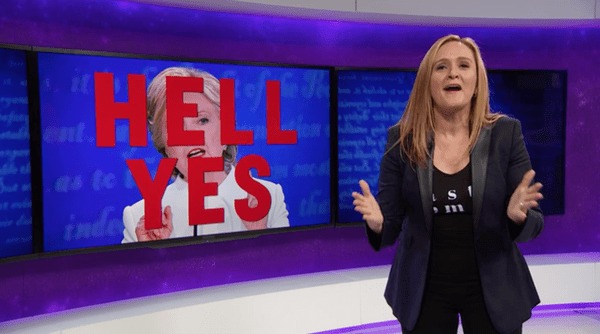 Samantha Bee recapped the final presidential debate between Hillary Clinton and Donald Trump, pointing out that Clinton was able to do what 16 Republican primary candidates and the entire GOP establishment couldn’t: “beat this dick-waving Berlusconi knock off like a little b*tch.”

Bee also took the media to task for praising the first 40 minutes of Trump’s debate performance as ‘normal.’

Said Bee, “Our media are so punch-drunk from the 16 month Hindenburg explosion of Trump’s candidacy they no longer notice how awful he is unless he hulks out on stage or grabs the foundational principles of our republic by the p—y.”

The funny lady also went after Republicans for appearing so shocked that Trump would threaten not to accept the results of the election. “Looking at the results of a democratic election and saying, ‘f*ck that!’ has been official Republican policy for at least 8 years now,” Bee quipped, referring to the obstructionist measures taken by the GOP throughout President Obama’s tenure in the White House.

Watch Bee dish on all the most delicious moments from the third presidential debate, below.

Previous Post: « Rachel Maddow: Trump’s Call for Racially-Targeted ‘Poll Watching’ Could Get the GOP in Big Trouble – WATCH
Next Post: ‘Moonlight’ Star on the Importance of Telling Black Gay Stories: ‘It’s Something That the World Needs’  »