Trevante Rhodes, star of the new film Moonlight, is speaking about the impact the film is having and on his experience playing a gay man.

Rhodes spoke with PEOPLE about the film, a bildungsroman in three acts about a boy growing up gay, black and poor in Miami.

Said Rhodes of the social significance of the film,

“It talks about a subject matter that is so prevalent today. Being a black man in American is relatively difficult right now, being a gay man in America is incredibly difficult and so being a black, gay man, like I’ve said before, can be perceived as the worst possible thing right now. So it is something that we need, that the world needs, and I’m thinking it’s a beautiful thing that people are receiving it. I didn’t think we were ready for something like that. And it’s really surprising and really refreshing to me to see that people are.”

Of how he approached playing a gay character, Rhodes said, 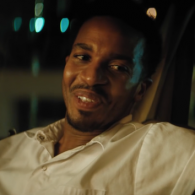 “I was born loving women but I easily could have been born loving men. It’s the exact same sensation… You don’t fall in love with someone [just] for their physical [traits], but for their mental.”

Rhodes says he didn’t tap into from any specific story or source material for his performance:

“One of my best friends is homosexual so I knew his struggle, but it wasn’t about pulling from that. I didn’t want to make it about that. It was really just about understanding people, understanding love and relationships…As actors and directors, I feel like our job, more so than anything else, is to shine a light on a subject and to let people know that they’re not alone.”

Watch a trailer for Moonlight, below.

Previous Post: « Samantha Bee: Hillary Beat Trump ‘Like a Little B*tch’ in the Final Debate – WATCH
Next Post: Ellen Found a Way to Predict the Winner of the World Series – WATCH »