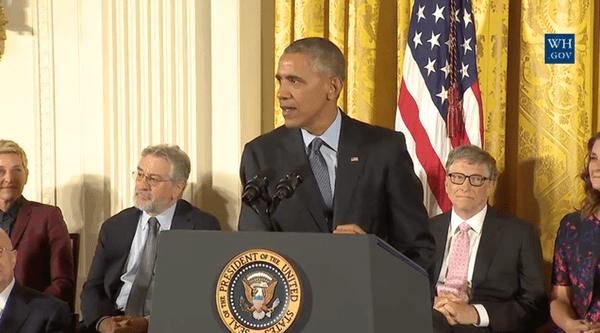 During the ceremony for the Presidential Medal of Freedom Award on Tuesday at the White House, President Obama became emotional while praising the courage it took Ellen DeGeneres to come out as gay nearly 20 years ago.

President Obama said that today we forget “just how much courage was required for Ellen to come out on the most public of stages almost 20 years ago” and that we similarly forget “just how important it was”, not just for her but also the nation as a whole to understand that someone “so filled with light”, someone like their next door neighbor could be LGBT.

Obama also noted that DeGeneres’ road to success today was far from smooth. “And she did pay a price,” he said.

“We don’t remember this, I hadn’t remembered it. She did, for a pretty long stretch of time–even in Hollywood,” the president added, referring to DeGeneres’ career after her sitcom Ellen was cancelled.

“And yet today, every day in every way Ellen counters what too often divides us with the countless things that bind us together and inspires us to be better, one joke, one dance at a time.”

To cut through the palpable emotion that filled the room the president then repeated one of Ellen’s jokes about wanting a tortilla chip that’s strong enough to hold guacamole. He quipped that he didn’t understand what that meant but felt himself getting choked up so needed something to lighten the mood.

WATCH THIS NEXT: Ellen DeGeneres Can’t Hold Back the Tears as Obama Honors Her with Presidential Medal of Freedom: WATCH

Ellen was named as one of this year’s 21 Presidential Medal of Freedom recipients on November 16.

The award dates back to 1963 and is the highest honor a U.S. civilian can receive.