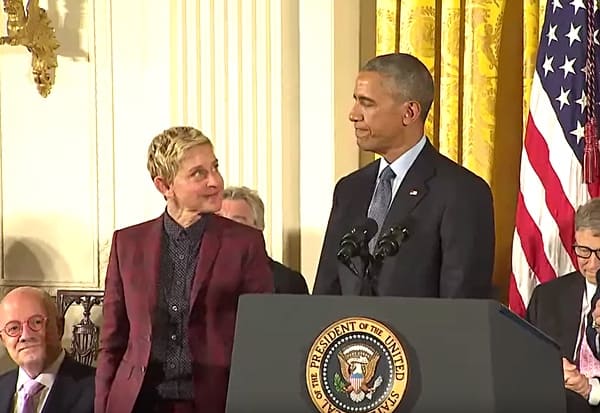 Along with 20 other distinguished honorees “who have made especially meritorious contributions to the security or national interests of the United States, to world peace, or to cultural or other significant public or private endeavors,” Ellen DeGeneres was honored for coming out, being out, and working for equal rights for all Americans.

Ellen seemed particularly moved as President Obama placed the award around her neck:

“In a career spanning three decades, Ellen DeGeneres has lifted our spirits and brought joy to our lives as a stand-up comic, actor, and television star. In every role she reminds us to be kind to one another and to treat people as each of us wants to be treated. At a pivotal moment, her courage and candor helped change the hearts and minds of millions of Americans, accelerating our nation’s constant drive toward equality and acceptance for all. Again and again, Ellen DeGeneres has shown us that a single individual can make the world a more fun, more open, more loving place so long as we just keep swimming.”

President Obama got choked up talking about Ellen’s courage earlier in the ceremony.

WATCH THIS NEXT: President Obama Gets Choked Up Talking About Ellen’s Courageous Coming Out – WATCH