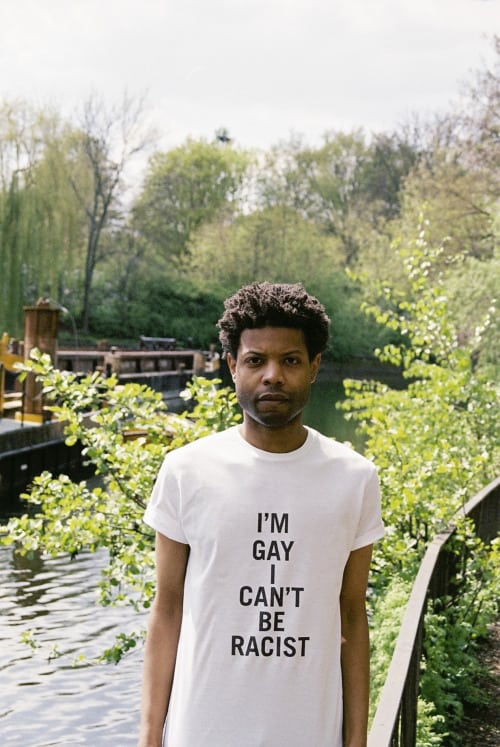 An American expat living in Berlin, Lopaz decided to model in a portraiture series wearing t-shirts emblazoned with offensive things he’s been told.

Lopaz has been sharing the project, titled “Things You Can Tell Just By Looking At Him”, on his blog, Him Noir. 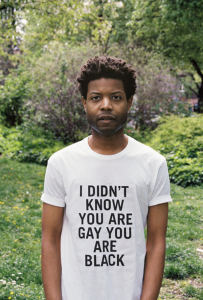 In an interview with The New York Times, Lopaz discussed his project and what it’s like being a queer black man living in Germany.

Lopaz says he is often mistaken as straight because he is black:

I think that what keeps other gay people from recognizing my sexuality is the fact that I am black. I find that very strange; it’s something that only happens in Germany.

There are several gay events where they will not play hip-hop music featuring black men. As one promoter said, “The men are too sexist and too aggressive.” How can they make such a blanket statement about hip-hop? I think it’s very strange and racist to say that because some people are sexist and homophobic, all of the artists are. It’s really problematic. 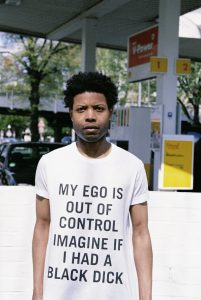 The NYT recounts one of many racist experiences Lopaz had while working at a gay nightclub in Berlin:

One night a man was angry that Mr. Lopaz didn’t have music by the singer Grace Jones and told him, “You should have it because you’re black.” The argument escalated, and Mr. Lopaz complained to his supervisor. But the supervisor was not sympathetic — instead, he told him that racism against blacks didn’t really exist.

Lopaz wrote more about that experience on his blog,

“The idea that I should have, do, or be anything based on the color of my skin is racist”, I said behind clenched teeth, trying to keep my composure. He backed away and threw himself on an available bar stool. “Don’t call me racist”, he shouted, “I’m gay”! Why do they always make it about them? Not appearing racist is more important to them than making sure that they don’t reproduce racism. He, apparently wasn’t finished. Cocking his head towards me, arms akimbo, he barked, “I can’t be racist I’m gay”. For him it was as simple as that.

I’m gay I can’t be racist. This idea, this statement, implies so many things all at once. A White person who believes that being gay excludes them from replicating racial oppression doesn’t understand the difference between race and sexuality. This ignorance is deleterious, negating the experiences of people like myself: non-White people who are gay, and are subjected to racism, homophobia, and incomparable forms of oppression found in the spaces where sexuality and race intersect. This gross misconception completely bypasses Whiteness as an integral part of this equation.

Speaking with Mic, Lopaz said of the impact he hopes his project will have,

“As a Black person I also have to contend with people who are s caught up in whether or not I think that they are racist. We don’t actually get to speak about whatever (racially) problematic thing that was said or done. We have all been educated to think in racist colonialist structures. If people actually accept this, it would be easier to have honest, constructive conversations about race.”

Watch a video from Mic, below.

[All photos via Isaiah Lopaz]